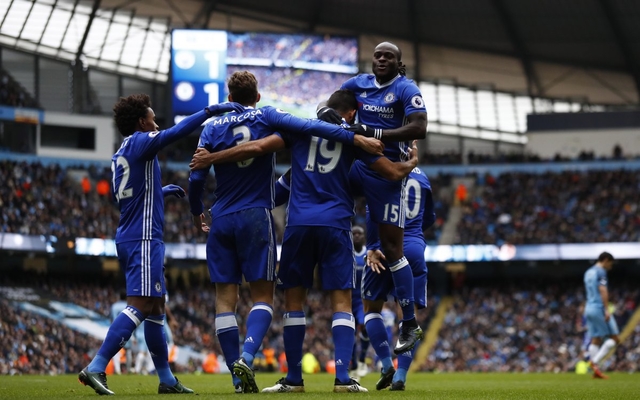 Goals from Diego Costa, Willian and Eden Hazard helped Chelsea secure a 3-1 win over Manchester City who were reduced to nine men late on.

Sergio Aguero and Fernandinho were sent off in the latter stages of the game to add to Pep Guardiola’s misery, and the pair score poorly in our player assessment.

In contrast, Costa shined and continues to lead his side as they now move four points clear at the top of the Premier League table for the time being.

A few shaky moments made worse by the fact that many will question whether he could have done better on the goals, particularly Willian’s.

His distribution might be impressive, but positionally not always perfect and has to be questioned for the manner in which Chelsea finished off the game.

Had problems dealing with Diego Costa and struggled in key moments as City weren’t able to keep it tight at the back.

His lack of pace was badly exposed which left City vulnerable at the back dealing with counter attacks. Guardiola should also be questioned for his selection and instructions.

Did well on a poor day for City in general, as he forced Cahill into the mistake for the goal and was a constant menace down the right flank.

His tenacity and physicality in midfield was key, but ruined his afternoon with a silly sending off regardless of Cesc Fabregas antagonising him.

Anonymous for large parts and wasn’t anywhere near as influential as he has been in recent games which led to him eventually being replaced.

A little too hesitant when in good positions in attack but struggled with the balance of his role with his defensive duties.

Chelsea did well to limit his influence in the final third as he struggled to make a decisive impact that City needed from him.

Wasteful afternoon from the Argentine and made it worse with his ridiculous challenge on Luiz which saw him sent off and it will now cost City in the weeks ahead.

Awful miss in the second half which could have killed the game as he sent his effort crashing off the bar when in front of an open goal. Not one of his better afternoons.

Couldn’t swing the game in favour of City.

Didn’t get up to the speed of the game.

Made some vital saves to deny City from opening up a lead which in turn kept his side in the game and gave them the platform to win it.

Put in a solid shift and kept his composure and awareness to avoid letting City overwhelm his side and take control of the game.

Fortunate to get away with an incident in the first half as he blocked off Aguero, but a commanding display from the Brazilian overall.

An own goal from the England international could have put his side in a real hole, and didn’t particularly look reassuring this time round.

Caught out early on by Leroy Sane but made some crucial interventions thereafter to turn it around and produce a top display.

Stamped his mark on the game to give Chelsea a foothold in the showdown. Made to work harder without Nemanja Matic by his side but did well.

Produced an assist for Costa’s goal but positionally, he wasn’t up to it and didn’t provide the presence and coverage that is offered by Matic.

Improved as the game went on after initially struggling with Jesus Navas, but the Spaniard can be pleased with his overall effort.

Worked hard for his team off the ball and played his part in the result but wasn’t as much of a threat going forward as he has been in recent weeks.

Led the line brilliantly and grabbed a goal, his 11th of the Premier League season, and an assist as he inspired his side to a comeback.

Finished the game off with Chelsea’s third and was a threat throughout. Perhaps should have had more but was a bit wasteful early on.

Took his goal well and gave Chelsea a different outlet after his introduction in a positive display.

Not enough time to have a major impact.