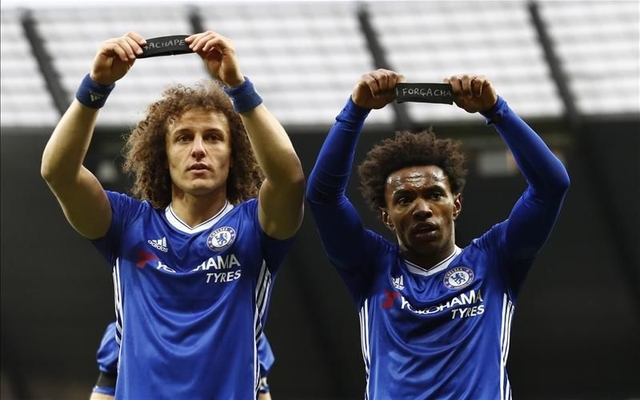 Chelsea secured a 3-1 win over nine-man Manchester City at the Etihad Stadium on Sunday to go four points clear at the top of the Premier League table.

An own goal from Gary Cahill had given Pep Guardiola’s men the lead, but Diego Costa scored an equaliser before half-time to leave the game evenly poised.

However, despite chances for both sides, it was Chelsea who were clinical in front of goal as they scored two brilliant counter-attacking goals to seal all three points.

Substitute Willian was the first to get on the scoresheet as he raced clear and kept his composure to stroke the ball past Claudio Bravo, who could have done better as it looked like a fairly straight forward finish for the Brazilian international.

Nevertheless, it was a brilliant goal and both Willian and David Luiz took the opportunity to pay a heartfelt tribute to Chapecoense after the tragic plane crash earlier this week.

Chelsea weren’t finished there either as Eden Hazard struck in the latter stages to seal the win after another impressive counter-attack.

The Belgian star raced clear of Aleksandar Kolarov and blasted the ball past Bravo to make it 3-1, and send the travelling Chelsea fans at the end of the stadium wild as Conte’s side continue their impressive run of form.

That makes it eight consecutive wins for Chelsea as they look a real force now with City’s afternoon going from bad to worse with Sergio Aguero and Fernandinho both getting sent off as they lost their heads late on following a clash between the two sets of players.