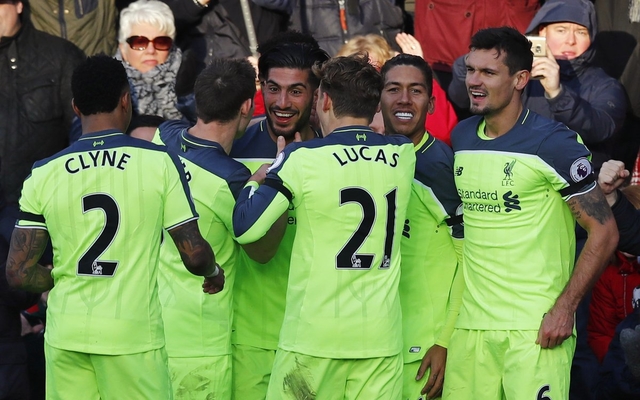 Liverpool fell to a 4-3 defeat at Bournemouth on Sunday as they failed to close the gap on Premier League leaders Chelsea.

The visitors raced into a 2-0 lead in the first half through goals from Sadio Mane and Divock Origi, but a Callum Wilson penalty gave Bournemouth hope of stealing something from the game.

That belief seemed to have been shattered when Emre Can scored this superb goal, curling a beautiful effort beyond Artur Boruc to restore Liverpool’s two-goal advantage.

Jurgen Klopp’s side had played some excellent football throughout the game, and it looked as though they were on course to secure all three points and close the gap at the top of the table back to just a solitary point after Chelsea’s win at Manchester City.

However, Bournemouth had other ideas as Ryan Fraser gave them hope after 76 minutes with an excellent goal to reduce their deficit and pile the pressure on Liverpool.

It took the home side just three minutes to find another as Steve Cook stepped up and produced this brilliant goal for Eddie Howe’s side.

Benik Afobe had a chance to complete a sensational turnaround but was denied by Lorius Karius, while Liverpool also went close on several occasions in the dying stages with five minutes of additional time.

With the visitors pushing to try and regain the lead, they were undone in dramatic circumstances when Nathan Ake found the winning goal as he bundled the ball home after Karius had failed to palm the initial shot away from danger.

From being 3-1 up, Liverpool surrendered their lead and suffered a heartbreaking 4-3 defeat as their 15-game unbeaten run was brought to an end in sensational fashion.