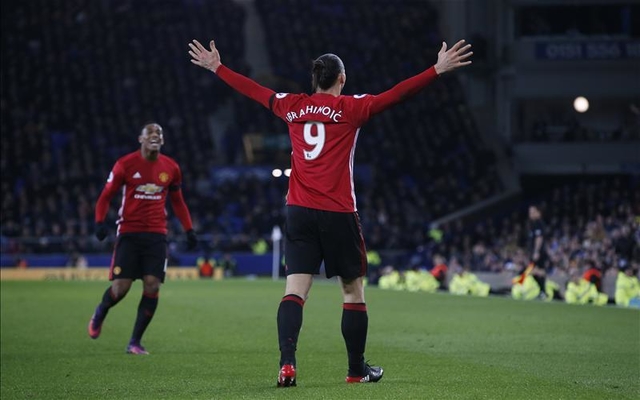 Manchester United forward Zlatan Ibrahimovic lit up his side’s game with Everton at Goodison Park on Sunday with a moment of magic to separate the two sides.

The 35-year-old made it six goals in his last five games in all competitions, and 12 overall for the season, as he continues to regain his form in front of goal and be a decisive figure for Jose Mourinho’s men.

Ibrahimovic with a touch of class, chipping the isolated Stekelenburg! ?pic.twitter.com/Dg203A2T1s

In truth, it was a poor opening 45 minutes on Merseyside as both sides failed to produce much quality and create chances which in turn led to many believing that it would be goalless at the interval.

However, Ibrahimovic had other ideas as he produced an excellent lobbed finish before having to anxiously wait to discover if his effort would cross the line after bouncing off the crossbar onto the post before spinning back beyond the line.

Maarten Stekelenburg won’t be too pleased with himself though, and neither will his manager, after he decided to race out of his goal and try to close the angle down.

Unfortunately for him and Everton, he got nowhere near the ball and made it an easy decision for Ibrahimovic and the big Swede didn’t disappoint with a lovely goal to extend his impressive recent form.