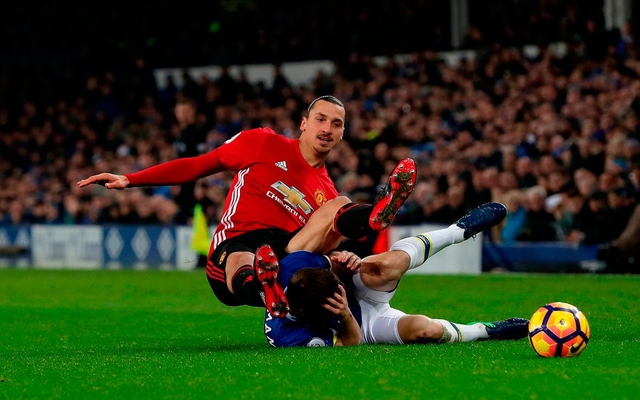 Manchester United forward Zlatan Ibrahimovic has insisted that if he wanted to kick someone in the head, they’d certainly know about it.

The 35-year-old was asked to address a coming-together between him and Seamus Coleman during the 1-1 draw with Everton on Sunday evening.

Referee Michael Oliver didn’t see the incident and so Ibrahimovic in turn went unpunished when it could well have been a very different outcome.

However, he has rubbished accusations that he meant to kick Coleman by coming out with a typical Ibrahimovic quote. While it’s quite a humorous assessment of the incident, it may not go down as well with the FA who could choose to take retrospective action.

“It was a physical game. They played hard. I heard one of the commentators say I kicked someone in the head on purpose, but it was a 50-50 duel and he pulled me down,” he is quoted as telling MUTV by Sky Sports.

Ibrahimovic continued his impressive goalscoring run with an exquisite effort against the Toffees at Goodison Park, but a late Leighton Baines penalty ensured that United had to settle for a share of the spoils for the third consecutive Premier League outing.

If he is indeed now suspended by the FA for his actions early in the second half of the encounter, it will come as a major blow to United and Jose Mourinho given his recent form.