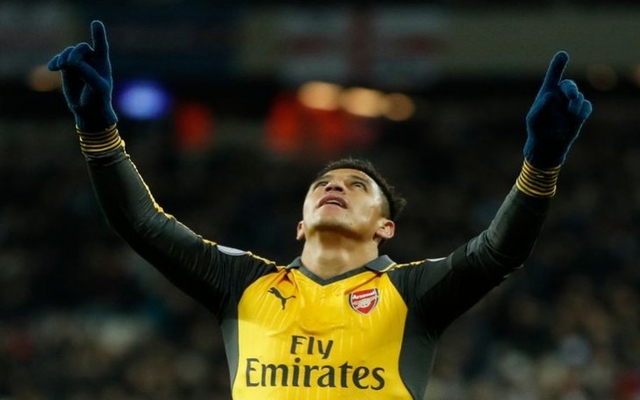 Arsenal forward Alexis Sanchez has been at the centre of an on-going debate in recent weeks as to whether or not he should be considered a ‘world class player’.

Sparked by MOTD pundit Alan Shearer, the former England marksman insists that he doesn’t consider the Chilean in that bracket just yet, and he needs to win the Premier League title for Arsenal first.

It’s a fair but arguably slightly harsh assessment for a player that has won a La Liga title with Barcelona, two Copa Americas with Chile and has proven himself to be a game-changing individual for Arsenal on countless occasions.

As witnessed with his hat-trick against West Ham United on Saturday night, the 27-year-old is on a different level when it comes to quality and composure in the final third.

All that combines to make him a world class player, and ultimately a Premier League title will just hammer home that point as it would be a major achievement for him to lead the club to their first title since 2004.

Many will still question whether he’s up there with the likes of Lionel Messi and Cristiano Ronaldo, but with more performances like the one seen at the weekend and with tallies of 13 goals and nine assists in 19 games so far this season and counting, he’s on the right track.

That also brings up another point. How much is Sanchez worth to Arsenal? The Evening Standard claim that both the former Udinese man and Mesut Ozil are looking to secure new contracts worth up to £290,000-a-week to put them on par with the top earners in Europe.

The same question can be applied here too in that does Sanchez deserve to be on that same financial level as the biggest names in Europe?

As he continues to establish himself as an irreplaceable part of the Arsenal team and proves that he can consistently put the team on his back and fire them to silverware, then it becomes a case of paying him what he wants.

Arsenal can’t afford to lose him at this stage as it would send all the wrong messages out about their ambitions as a club both on and off the pitch. In turn, pay him what he wants, secure his future, continue to make him the focal point of the attack and let him loose on Premier League defences.

Sanchez is world class and looks ready to prove it to his doubters.