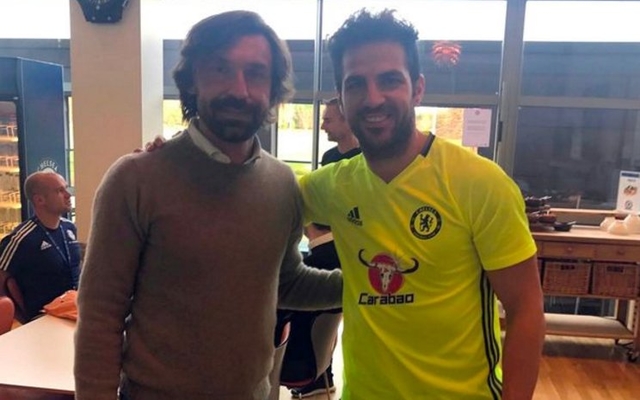 The 37-year-old is on holiday in London with his family, and he took the opportunity to visit his former boss Antonio Conte and other members of staff that he worked with in Turin.

While most supporters were limited to reacting to what they saw on social media, here’s one fan was who particularly excited to meet the legendary Italian midfielder…

Pirlo, a World Cup winner, a Champions League and Serie A winner on multiple occasions, is currently plying his trade with New York City FC, but that hasn’t stopped some excitable Chelsea fans hoping that he makes the move to London in some capacity.

Meanwhile, Conte enjoyed a little joke at his press conference on Friday as he addressed Pirlo’s visit and evidently enjoyed seeing his former player.

“I’m happy for his visit with his son and we have a good relationship,” he told the media. “Andrea comes here only to visit and he has a contract in America and he’s enjoying it there.

“No, he didn’t train. But he’s still able to do a good session!”

In London with my lovely children ? #holidays pic.twitter.com/hbWz3tLNHe

@Pirlo_official @CarefreeDaily pirlo is a blue. A #Chelsea fan. He has posted a tweet with a blue heart ? too. Up the chels.#KTBFFH

@Pirlo_official are you going to Sundays game, to watch conte?