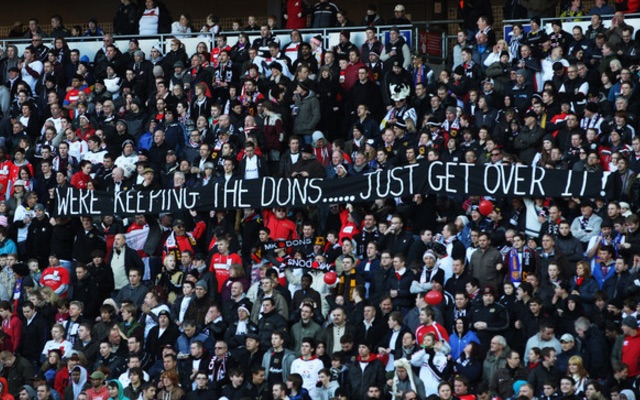 You’ve probably already heard the dirty story about how MK Dons came to be.

But this video from Copa90 will likely tell you a few things you didn’t know. For example, how Wimbledon were touted out around Dublin, Manchester and Wigan before they moved to Milton Keynes. And how loyal Wimbledon fans effectively stood no chance because of Asda’s influence.

This story – excellently told ahead of last weekend’s grudge match, which Milton Keynes won 1-0 – highlights just how crazy this saga was.

It certainly puts West Ham fans’ gripes about the Hammers’ recent switch to Stratford into perspective.

Arsenal relocated in 2006, while Spurs and Chelsea are in the process of undergoing short-distance moves. Fans of these London giants should count their blessings.

When Gunners fans accuse the board of being all about the money, they should instead be grateful that those cash-hungry businessmen have so far resisted the urge to take Arsenal out of London.

The theft of Wimbledon FC was sad, but it has been justified financially. This sets a worrying precedent and it will almost certainly happen again, probably on a much bigger scale.

As the Premier League becomes more and more a global game, what is there to stop Manchester City becoming the Abu Dhabi Aliens, or Hull City taking their Tigers franchise to Africa?