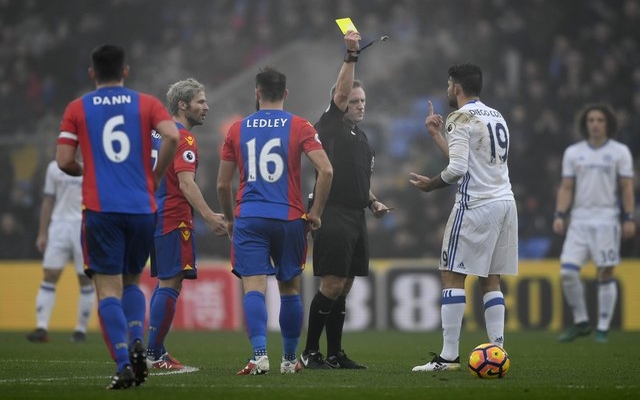 Chelsea striker Diego Costa went 11 games without a booking, but it all came to a crashing halt at Crystal Palace on Saturday.

The Spanish international was booked in the 22nd minute by referee Jon Moss for a silly hack from behind on Joe Ledley, and despite his protests, the yellow card was brandished.

It just so happens that Costa was a booking away from a suspension, and funnily enough it now means he gets Boxing Day off when his teammates will be preparing to face Bournemouth.

Obviously he wasn’t trying to ensure that he could fully enjoy himself on Christmas Day and not worry about a hangover, but that hasn’t stopped him from getting ripped on social media for it.

On a serious note, it will be a massive blow for Chelsea boss Antonio Conte given the striker has 12 goals and five assists in the Premier League already this season as the Blues continue to try and move away from the chasing pack at the top of the table.

When you've been trying for weeks to get Christmas off and Diego Costa does it without even trying… pic.twitter.com/KF9hbjC8Ny

Oh well, at least @diegocosta will be able to enjoy a beer this Christmas! ?

Diego Costa now has Boxing Day off, and so can spend the day stamping innocent kittens to death. It truly is a Christmas miracle.

Diego Costa goes 11 games without booking but gets yellow today for completely unnecessary challenge & now has Boxing Day off. Coincidence?

Silly booking that leads to Boxing Day off?

Three months after becoming a free agent, Diego Costa could be about to reveal his new club and it’s a real surprise Mar 26 2021, 7:32
Benfica