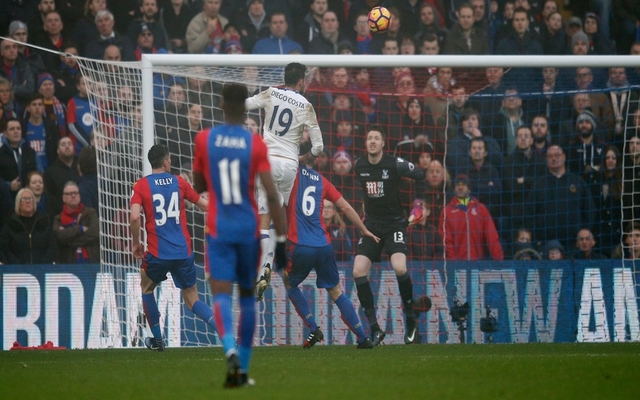 Chelsea striker Diego Costa continued his fine season with his 13th goal of the Premier League campaign at Crystal Palace on Saturday.

Having been booked earlier in the game which will see him miss the clash with Bournemouth on Boxing Day, the Spaniard ensured he did his part this weekend by breaking the deadlock as he rose highest to head past Wayne Hennessey.

However, Cesar Azpilicueta played a major part in the goal as he broke forward into space and delivered a perfect ball into the box for the Spaniard to attack and he certainly did the rest.

Chelsea sat six points clear at the top of the Premier League prior to kick-off, and a huge reason behind that has been Costa’s form.

His absence in the next game will be a major blow for Antonio Conte, but his primary focus will be on Palace and Costa has delivered yet again as he continues to fire Chelsea towards a title while also moving clear of Arsenal forward Alexis Sanchez at the top of the goalscoring charts again.

Further, it was Costa’s 50th goal for Chelsea as he looks as though he’s back in top form and ready to lead them to silverware after a short break next weekend.