Chelsea have reportedly missed out to Bayern Munich in their pursuit of Hoffenheim defender Niklas Sule, with the German giants agreeing a deal with him.

As noted by The Daily Mail earlier this week, Antonio Conte was linked with making an improved £30m bid for the German central defender in January after missing out on him this past summer.

The 21-year-old was seen as a key figure to help rebuild an ageing Chelsea backline, but it appears as though the Premier League pacesetters are to miss out on acquiring his services.

As seen in the image below of Bild on Sunday, Bayern are said to have agreed to sign Hoffenheim duo Sule and Sebastian Rudy next summer. 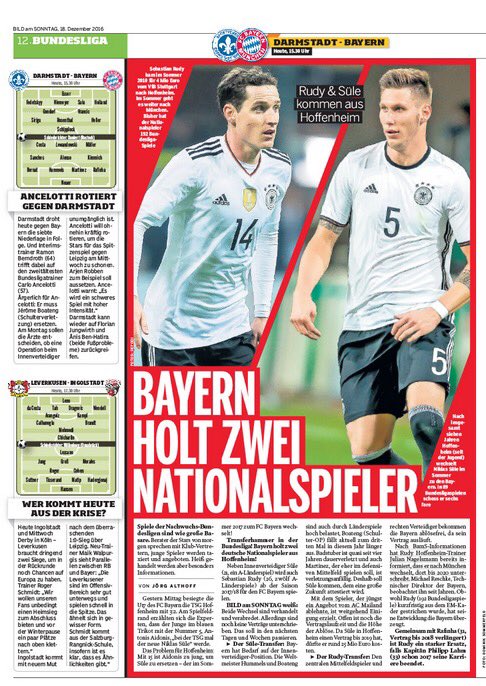 The latter will arrive on a free transfer as his contract is set to expire, while there are no financial details on what it will take to prise Sule away from their domestic rivals.

It’s a disappointing setback for Chelsea and Conte if Sule is heading to Bavaria next year, but the Italian tactician will now just have to look elsewhere.

With John Terry and Branislav Ivanovic reaching the end of their respective contracts next summer, it might be the right time to freshen things up at the back.

Despite the fact that Cesar Azpilicueta, David Luiz and Gary Cahill have looked formidable in a back-three in Conte’s 3-4-3 system with nine clean sheets in their 11 consecutive wins, it will be about adding depth and long-term options that can fill those roles for many years to come.

With Sule seemingly now out of the picture, it will be down to Conte to identify the next best target to solve his headache.