The Blues have been the best English team by a long distance so far this season, with their well-balanced XI bossing proceedings in an edgy 3-4-3 formation.

But as Christmas is all about tradition and 4-4-2 is the more traditional English formation, that is what we have used for our mid-term Premier League team of the season, made up of the eleven best-performing individuals in the league. 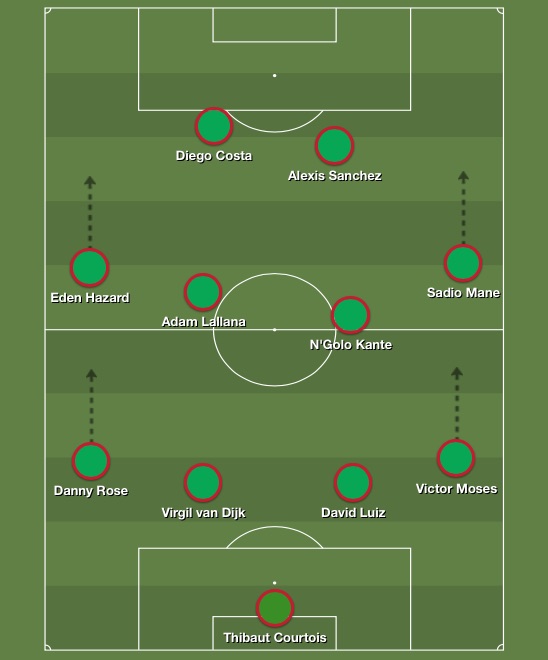 Many rival fans scoffed when Chelsea splashed serious cash to re-sign Luiz in the summer, but they’re not laughing now.

Meanwhile, Moses has been a total revelation this season. The winger has been reinvented as a wing-back and become a vital cog in Antonio Conte’s team. Technically, he’s not a right-back, but he is pretty close and has proved this season that he is more than capable defensively, as well as going forward.

Chelsea lacked energy in midfield last season. They certainly don’t anymore, thanks to their headhunting of N’Golo Kante from champions Leicester City. He is arguably the player who has played the biggest role in resurrecting the Blues following their 2015-16 nightmare.

Eden Hazard was awful last season, but he has been terrific on the left side of Chelsea’s three-pronged attack, helping himself to eight goals already.

Top-scorer Diego Costa leads the line on account of his 13 goals and five assists. We’ve gone for Arsenal’s Alexis Sanchez as Costa’s strike-partner. The Gunners hero, who has netted 12 goals and provided six assists, is in the form of his life.

Some may argue that Zlatan Ibrahimovic deserves a place up front, having bagged 11 times for Manchester United. However, as well as being narrowly outscored by Alexis, Zlatan has yet to make a single assist and, in truth, can be a passenger when his team don’t have to ball.

No side can match Chelsea’s record defensively this season, but Tottenham Hotspur and Southampton have also been excellent at the back, with seven shutouts each.

Danny Rose has been Tottenham’s star man so far, reinforcing his position as England’s no.1 left-back, while Virgil van Dijk’s superb showings at the heart of Southampton’s backline have seen him valued at £60m, according to The Telegraph.

Liverpool’s latest recruit from St Mary’s has taken to Merseyside life like a duck to water, racking up eight goals and four set-ups in 16 starts, while Lallana has provided six of each.