SportsDirect.com have been busy over the festive period as they’ve worked out the most popular Premier League jerseys so far this season.

As seen in the graphic below, the high-street giants have compiled a top-10 list which will have likely included Christmas sales too as jerseys would undoubtedly have been a hugely popular choice for presents.

In an unsurprising twist of events, Man United feature heavily on the list with Paul Pogba and Zlatan Ibrahimovic leading the way as the top two, with David De Gea and Marcus Rashford also making the top 10.

There is a decent Arsenal contingent with Alexis Sanchez and Mesut Ozil in at third and fourth respectively, proving their pulling power off the pitch.

That will matter little to Gunners supporters though who will want more from the pair on the pitch as Arsene Wenger’s side look to bounce back following back-to-back defeats to Everton and Manchester City which have had a massive negative impact on their Premier League title hopes.

Meanwhile, there are two Liverpool stars also in the top 10 with Philippe Coutinho and Sadio Mane included, while Eden Hazard is the only Chelsea player to make the cut showing that perhaps the Blues aren’t the most popular bunch.

Dimitri Payet also deserves a nod of recognition as he is the only player outside of the Premier League’s traditional ‘big clubs’ to make it with the West Ham United playmaker in at eighth on the list. 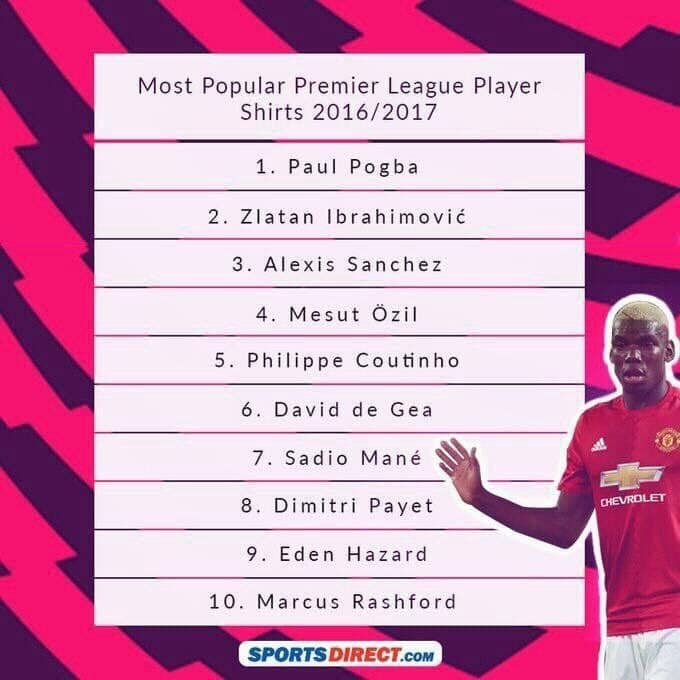