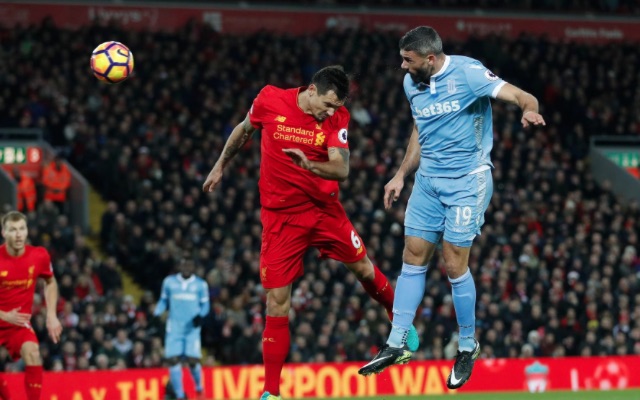 Liverpool are cursed with not one dodgy goalkeeper, but two!

Simon Mignolet was deemed the least awful by manager Jurgen Klopp ahead of Tuesday’s Premier League game with Stoke City.

However, Klopp may soon have to reevaluate that decision and give Loris Karius another go, after Mignolet’s latest error.

Mignolet was beaten at his near post by Stoke striker Jonathan Walters inside the opening 15 minutes of Liverpool v Stoke.

The Danish stopper did manage to get a hand to the ball, but only to slap it into the corner of his net.

Walters, naturally, looked delighted when his header hit the net.

He has found goals hard to come by this season.

Before today, he had only scored once in the 2016-17 Premier League

The goal was probably even sweeter for Walters as it came at Anfield. Walters was born in Moreton, Merseyside, and was a big Everton fan as a child.