With the January transfer window around the corner, the focus will also be on clubs keeping their stars who are on expiring contracts.

Many big names are entering the last six months of their current deals, and it will be a concern for managers around Europe to get them to renew or to potentially find the right deal so that both parties are happy.

Sky Sports have put together a starting line-up of top players from around Europe that face an uncertain future, and it includes several Manchester City stars who could be on their way out.

Pep Guardiola has done a decent job at the Etihad so far this season with his side still very much involved in the Premier League title race, but this still doesn’t feel like it’s his squad entirely and so he’ll need a couple more transfer windows to further transform the team.

Whether Willy Caballero, Pablo Zabaleta, Yaya Toure or Jesus Navas really form part of that long-term vision remains to be seen, as the quartet will all be out of contract next summer and so Guardiola will have to make a decision on their futures.

There is a very real possibility that the Spanish tactician could lead a bit of a clear-out, and so there could be plenty more changes at City in the not too distant future.

Elsewhere, Chelsea stalwarts John Terry and Branislav Ivanovic look as though they could be ready to end their respective spells with the club.

Terry is widely expected to remain in a coaching capacity while Ivanovic will likely move on to extend his playing career further, but it’s questionable if they have a future in Antonio Conte’s squad with the Italian getting so much success with his current 3-4-3 system with neither of his old heads getting a chance.

Meanwhile, Arsene Wenger has a big decision about his own future to make next year, but Per Mertesacker and Santi Cazorla could be following him out of the exit door.

With Laurent Koscielny and Shkodran Mustafi as his first-choice centre-half pairing and with the likes of Gabriel and Rob Holding offering cover, Mertesacker’s time at Arsenal could be over although there is a big argument in favour of keeping Cazorla who is still hugely important to the Gunners.

There will be an interesting few months ahead with Manchester United also needing to make a decision on Michael Carrick as the veteran midfielder has been really crucial to their good form this season. However, does Jose Mourinho still go with him or look elsewhere for a long-term replacement? All will be revealed between January and June. 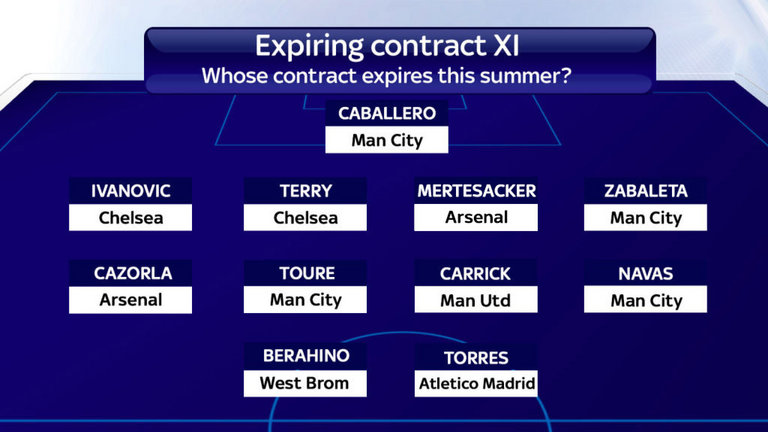