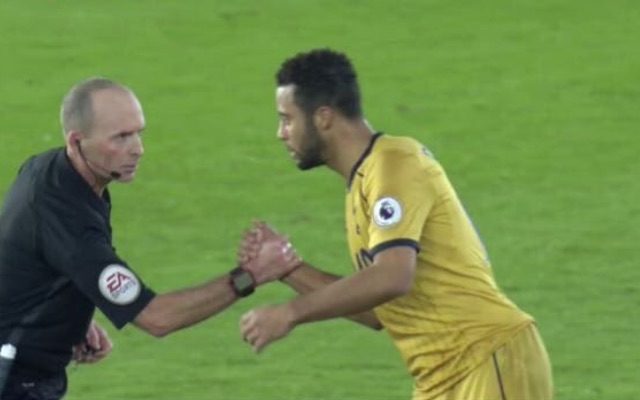 Mike Dean seems to trend on Twitter more often than Katie Hopkins, such is the controversial reputation of the Premier League super ref.

The 48-year-old was again in the limelight on Wednesday night after an action-packed performance during Tottenham Hotspur’s 4-1 win over Southampton.

But it was another incident that really got the football fans of Twitter fuming.

Let us set the scene…

Back in November 2015, Dean’s over-enthusiastic signalling made it look like he was openly celebrating a goal scored by Tottenham midfielder Mousa Dembele during a 3-1 win over Aston Villa.

Of course, Dean was actually gesturing ‘play-on, advantage’, before pointing to the centre circle to award the goal.

Nevertheless, it was very funny and is widely remembered by many as Dean celebrating a Dembele goal.

So, when Dean and Dembele shared this powerful handshake live on TV on Wednesday, all hell broke loose on social media.

WTF did I just witness? Dembele and Mike Dean shaking hands before being subbed?? Wait till the end you muppets!!!#AskingForIt #SaintsFC

Why the fuck is Dembele dapping up Mike Dean before being subbed off ??????

Mike Dean and Moussa Dembele are bromance goals. Please tell me someone else saw that embrace?

Dean had earlier shown a yellow card to Dembele, as well as booking Jan Vertonghen, Kyle Walker and Danny Rose.

Walker and Vertonghen will now serve one-game suspensions when Spurs visit Watford on New Year’s Day as a result of picking up their fifth bookings of the season. 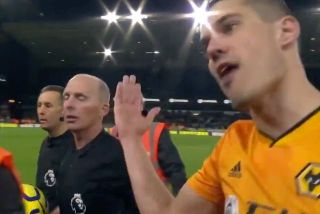