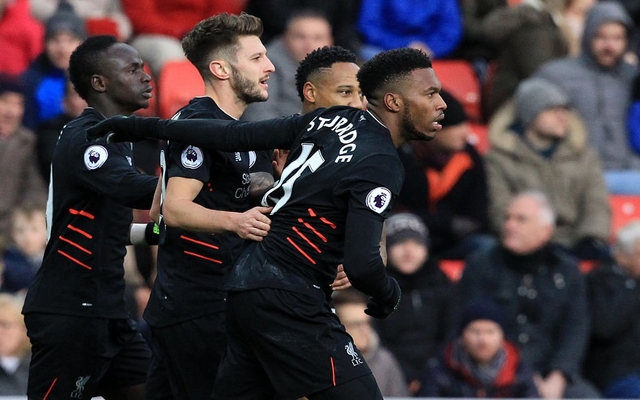 Liverpool were held by Sunderland to a 2-2 draw at the Stadium of Light on Monday as they missed their opportunity to close the gap at the top of the table.

Talk prior to kick-off was dominated by the inclusion of Daniel Sturridge in the starting line-up, and it took the England striker less than 20 minutes to make an impact as he scored the opening goal of the game.

However, not for the last time in the encounter, Jermain Defoe struck from the penalty spot to peg Jurgen Klopp’s side back and give the hosts hope of picking up a surprise result.

Sadio Mane had other ideas as he scored his ninth Premier League goal of the season ahead of leaving for the Africa Cup of Nations this week, but Liverpool weren’t able to hold on as Defoe was given a second chance from the penalty spot and he made no mistake.

In turn, Liverpool were forced to settle for a share of the spoils with Sturridge yet again picking up an injury problem as he was seen limping and needing assistance leaving the bench after the full-time whistle.

Nevertheless, he was one of Liverpool’s star performers on the day, while in contrast there were disappointing displays from summer signings Ragnar Klavan and Georginio Wijnaldum.

Chelsea will have the chance to move eight points clear at the top of the Premier League table when they face Tottenham Hotspur on Wednesday, with Klopp and his players left frustrated that they couldn’t start 2017 with a win.

That was in large part to an excellent performance from Sunderland goalkeeper Vito Mannone, who produced countless quality saves to earn his Man of the Match award.