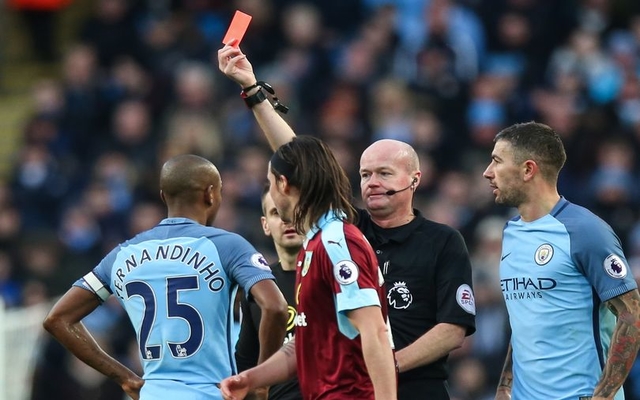 Manchester City midfielder Fernandinho picked up his third red card in just six games on Monday to leave his side short against Burnley.

The Brazilian international had only just returned to action following his three-match ban after the ugly scenes in the loss to Chelsea.

However, he looks set for another lengthy spell on the sidelines which could prove to be very costly for Pep Guardiola after being shown a straight red for a two-footed tackle on Johann Berg Gudmundsson, as seen in the video below.

If the suspension kicks in as expected, he’ll now miss Premier League and FA Cup meetings against West Ham United, as well as league clashes with Everton and Tottenham to leave City short in midfield with Guardiola already without the services of Ilkay Gundogan for the rest of the season due to injury.

It may not prove to be too costly against Burnley after Gael Clichy struck in the second half to give his side the lead at the Etihad, but it certainly won’t help City’s cause as they look to keep up the pace in the title race.

Worse than Rojo's? Probably not but what does that matter right? ? pic.twitter.com/W9h43F0gdF #MCFC #Fernandinho