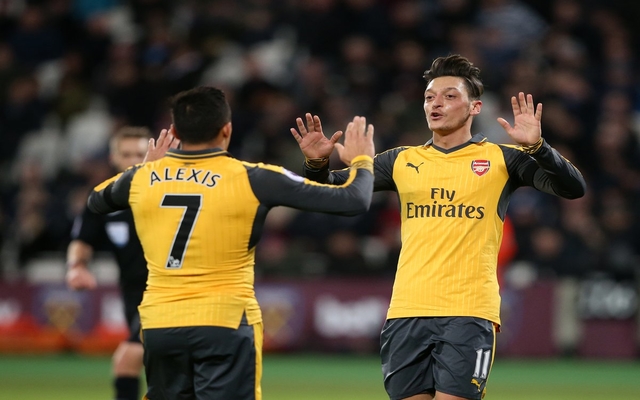 Arsenal forward Alexis Sanchez is much closer to reaching an agreement with the club on a new contract compared to teammate Mesut Ozil, according to El Confidencial journalist Kike Marin.

Now, it’s worth starting by addressing the fact that many supporters will question the authenticity of Marin’s contacts and knowledge of what is really happening behind the scenes at the Emirates Stadium.

Nevertheless, given that he works for a reputable publication and has history of being reliable with Arsenal news, it’s highly unlikely that he has just picked out this story from nowhere.

As seen in his tweet below, he claims that Sanchez is closer to securing a contract extension than Ozil, with the German international’s situation more complicated due to issues with his wage demands.

Both Sanchez and Ozil will see their contracts with Arsenal expire in 2018, and given their quality and importance to the Gunners, it’s no surprise that the club wish to secure their futures.

However, considering the fact that Sanchez has scored 15 goals and provided 13 assists in 26 appearances in all competitions so far this season, the Chilean forward has to be the priority.

With an ability to drag Arsenal through tough games and produce a bit of quality needed to unlock teams, he is undoubtedly the best player at the club right now.

As for Ozil, he has nine goals and seven assists in 23 games so far this season, but doubts persist as to whether or not Arsenal would be much worse off without him.

He struggled badly in December and not for the first time was missing in big games against Everton and Manchester City when his side needed him, and in turn that led to fierce criticism from supporters.

While he’s currently sidelined due to an illness, the pressure will really be on him to prove he deserves his new deal and the wages being demanded, as ultimately many would argue that perhaps Arsenal would be better off signing Sanchez to an extension and looking for a replacement for his teammate.