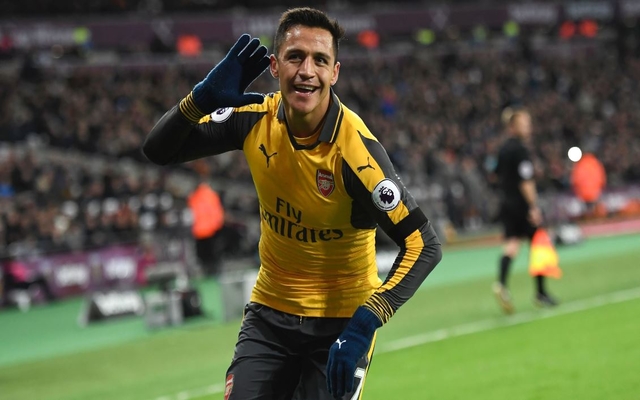 Arsenal ace Alexis Sanchez is reportedly being urged not to sign a new contract with the club by Paris Saint-Germain, who wish to sign him this summer.

The 28-year-old currently has 18 months remaining on his current deal, but according to The Mirror, PSG want him to avoid signing an extension as they are ready to launch a £60m assault for him at the end of the season.

It’s added that Arsenal are willing to offer a contract worth around £200,000-a-week to the Chilean international, but there are still doubts as to whether it will be enough to convince him to stay in north London.

PSG would certainly be able to offer more in wages, and with Arsene Wenger conceding this week that there is a limit to what the Gunners can offer him, as noted in the report, the signs don’t look particularly reassuring for Arsenal fans who will be desperate to see Sanchez commit his future to the club.

The former Udinese and Barcelona star has been in stunning form so far this season, scoring 15 goals and providing 13 assists in 26 appearances in all competitions.

As he has proven that he is the one player who could potentially drag Arsenal to the Premier League title this season, losing him would be a major setback for the club and one that supporters will be left furious over.

In turn, the pressure will be on the Gunners to offer suitable terms, as it appears as though if they aren’t willing to satisfy Sanchez’s demands, then PSG are more than happy to swoop and take advantage of the situation in the summer.

The Ligue 1 giants may be looking to make a statement in the summer transfer window, particularly if they end the season empty-handed as they are currently five points adrift of top spot in the league and had their troubles in the Champions League before qualifying for the knockout stage.