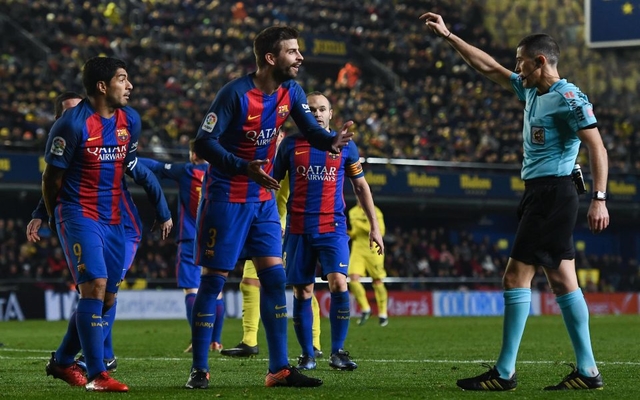 It’s fair to say that Barcelona defender Gerard Pique wasn’t in a good mood on Sunday night as his side were held to a 1-1 draw by Villarreal.

The 29-year-old was furious at the full-time whistle as he believed that a handball from Bruno went unpunished and denied his side the chance to collect all three points.

As he stormed off the pitch, he was seen looking into the stands before it became apparent who he was trying to address and what he wanted to say.

While pointing at La Liga boss Javier Tebas, Pique can be seen and heard saying: “Hey, you. Did you see that? Yes you!”

VIDEO: Gerard Pique to LFP President Javier Tebas: " Eh you, yes you… Did you see that? Did you?" [EDD] pic.twitter.com/zXThHvrMAU

Pique was angry with referring decisions in the Copa del Rey clash with Athletic Bilbao last week too as he suggested that there wasn’t a level playing field when it comes to officiating of Real Madrid and Barca games.

After the draw at Villarreal, he didn’t relent either as he continued to insist that Tebas knew he was talking to him and believes that decisions each passing week only serve to prove him right.

Barca aren’t enjoying the best of campaigns so far, as they sit five points adrift of Real Madrid at the top of the La Liga table, while Zinedine Zidane’s men also have a game in hand as they remain unbeaten this season and continue to look formidable.