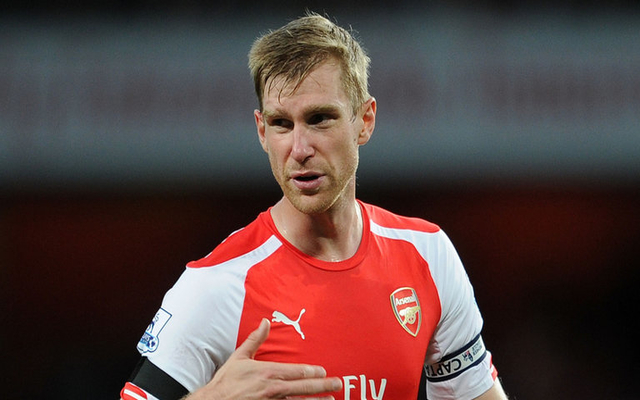 Arsenal defender Per Mertesacker will reportedly stay at the club this month as the Gunners have no intention of letting him leave on loan.

The German veteran is out of contract at the end of the season and will see his playing time limited due to the partnership formed by Laurent Koscielny and summer signing Shkodran Mustafi.

With Gabriel likely to be Arsene Wenger’s first back-up option, it’s difficult to see how Mertesacker will have playing time as the 32-year-old continues his recovery from a knee injury he suffered last summer.

According to The Mirror though, Wenger has no desire to see his experienced defender leave on loan this month, and so Mertesacker will remain at the Emirates Stadium until the end of the season when a decision will be made on his long-term future.

In contrast, one player who looks like he’s on his way out is Carl Jenkinson, as The Sun report that the full-back is set to join Crystal Palace in a £3m deal.

Should the move go through, it would reunite him with Sam Allardyce, under whom he enjoyed a successful loan spell at West Ham United, with The Mirror adding that ‘Big Sam’ is trying to push through the deal ahead of this weekend’s clash with the Hammers.

Having been limited to just five games so far this season, the 24-year-old would undoubtedly welcome the chance to secure regular football and he has also had to contend with criticism from the Arsenal supporters this season.

After a string of questionable performances at right-back following an injury suffered by Hector Bellerin, it’s unclear as to whether or not there is a place for Jenkinson with the Gunners, and so a £3m move to Palace would seemingly suit all parties.

Meanwhile, The Telegraph also report that Arsenal will renew their interest in Real Madrid striker Alvaro Morata, who as per The Daily Mail, rejoined the Spanish giants in a €30m move last summer.

The 24-year-old has struggled with injuries and in turn playing time this season, but still has nine goals to his name. Unsurprisingly, it’s added that Madrid are keen for him to stay but the promise of a more prominent role at Arsenal could tip the balance in their favour.