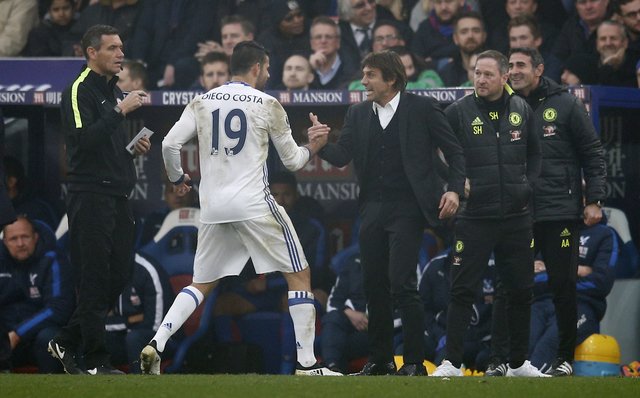 Diego Costa’s Chelsea future is in serious doubt after a bust-up with Blues boss Antonio Conte, according to the Daily Mail.

It all appeared to be plain sailing at Stamford Bridge. The Blues are five points clear at the top of the Premier League, with Costa leading the race for the Golden Boot after finding the back of the net 14 times. Conte looked to have brought the Spaniard back to his brilliant best, but it appears as though a major spanner may have been tossed into the works.

As per the Daily Mail, the two clashed in a furious feud over Costa’s fitness. The tabloid claim that Costa believes he is suffering from a problem in his lower back, an idea that the Chelsea medical staff and Conte have refuted. They note that the disagreement has caused serious damage in Costa and Conte’s relationship, and it is unclear whether it will be reparable.

The Daily Mail claim that Chelsea were ready to offer Costa an extension to his current deal, but that is now in major doubt. He will also not be available for their game with Leicester at the weekend after not travelling with the squad.

This is, without doubt, a major blow for Chelsea’s title hopes.