Pierre-Emerick Aubameyang’s Borussia Dortmund future is in doubt after the club’s chief executive said that every player has a price, according to The Sun.

Aubameyang has established himself as one of Europe’s deadliest strikers in recent seasons, but his form this time around has been impressive even by his standards.

The Dortmund star has found the back of the net 16 times in 15 Bundesliga appearances so far this campaign, averaging a goal every 84 minutes. It comes as no surprise that he is attracting interest from some of the biggest clubs in Europe.

As per The Sun, Manchester City, Real Madrid and PSG have all expressed their desire to secure Aubameyang’s services. The tabloid believe that Shanghai SIPG were also keen on making him the next household name to make the switch to the Chinese Super League, where he would earn an eye-watering £675,000-a-week.

They may have all been given some encouragement too, as Dortmund’s chief executive Hans-Joachin Watzke has openly discussed the possibility of selling Aubameyang, revealing that if a desirable offer comes in the club will consider it.

The Sun cite German newspaper Bild in quoting Watzke, who reveals: “If an offer comes in that does turn his head, we will sit down and discuss it. But even that does not mean he will definitely leave.” 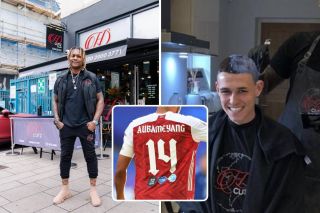