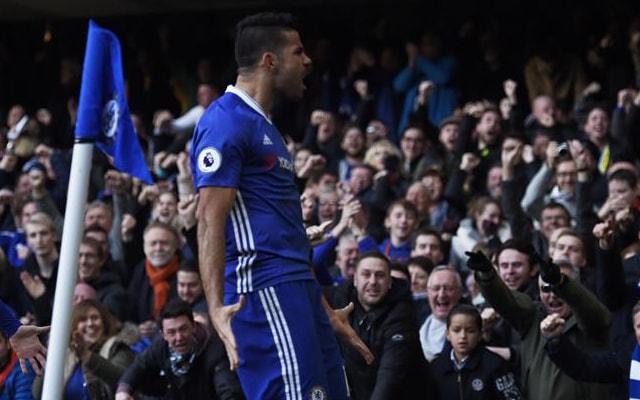 Chelsea forward Diego Costa’s agent, Jorge Mendes, met with the chairman of Tianjin Quanjian on Friday to spark uncertainty over his client’s future.

It comes after speculation that there was already trouble brewing after the Spaniard was left out of the squad to face Leicester City this weekend following a bust-up with his manager.

On top of that, the Evening Standard are now suggesting that Tianjin are about to make the situation even more complicated by trying to prise the 28-year-old away from England.

With an offer of £570,000-a-week reportedly on the table, Mendes was seen giving a signed Cristiano Ronaldo shirt to Shu Yuhui, chairman of the club, which naturally increased talk that he could potentially quit the Premier League leaders even though he has two years left on his contract.

Costa has been in great form so far this season, scoring 14 goals in 19 games as he continues to work hard. However, Chelsea’s resolve could be seriously tested as the report adds that Tianjin are prepared to pay in excess of £80m to prise him away from Stamford Bridge.

Given his form this season after settling and feeling happy under Conte, combined with the lack of quality and depth that Chelsea have up front, then it is imperative for the club to keep hold of him.

Nevertheless, it won’t be that easy as with the money on offer from the CSL side, Chelsea won’t be able to compete with that and so Costa has a decision to make on whether or not he accepts the offer and cashes in or if the club keep their best players and continue to compete for silverware.

? | This picture of Tianjin Quanjin chairman Yuhui with superagent Jorge Mendes (Ronaldo, James,.. ) is getting a lot of attention. #CSL ?? pic.twitter.com/mITVkpg0cW