As the dust settles on an incredible afternoon at Anfield, let’s take a look at five things we learned from Swansea City’s shock 3-2 win over Liverpool.

Liverpool winger Sadio Mane, who is away on international duty with Senegal, was certainly missed. This was also the case against Man United last week.

His relentless speed and directness frightens teams, and this seems to be something Liverpool have been lacking since his departure to AFCON 2017.

He was Liverpool’s MOTM, but the two-goal Reds star would have been even more effective had Mane also been on the pitch.

When Firmino drops deep usually, he does so safe in the knowledge that Mane will stretch the opponent’s backline, creating more space, but also providing an outlet for the Brazilian to feed through to.

Without Mane, Firmino’s work in the deep went largely unrewarded. 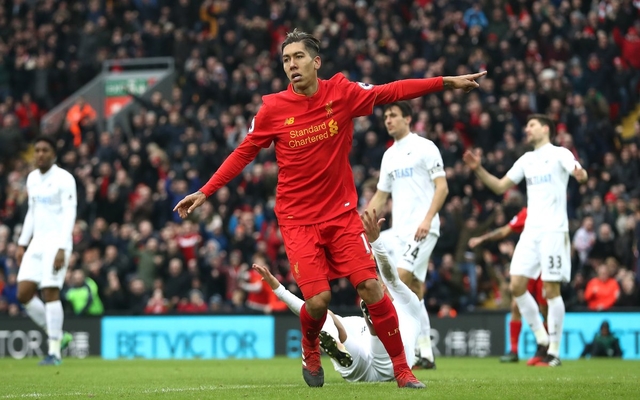 Up until the first goal scored by Swansea, no crosses were swung in towards Fernando Llorente or any other Swansea player.

We saw from his header for the second goal just how dominant Llorente can be in the air, as well as the first goal which also came from a cross into the box.

Swansea need to capitalise on this, by playing to his strengths to score more goals, as he is their greatest goal threat. He will surely be key to the Swans survival bid.

Even though he finished off the superb move for his goal to confirm Swansea’s three points, Gylfi Sigurdsson was largely kept quiet out on that left hand side.

He wasn’t able to influence the game as much as he normally does. Sigurdsson is Swansea’s chief creator, who can score a goal out of nothing. To do that he needs to be played centrally in the Swansea lineup.

Once again we have seen the dangerous 2-0 lead not being as secure a scoreline as it perhaps seems, especially against a Liverpool side who have such good attacking players.

Swansea did still manage to get the win in the end after a hard fought battle, however the game really showed that a win is far from secure at 2-0.

Tom Carroll played like the tricky midfielder Swansea have been looking for since Joe Allen left the club.

The young central midfielder looked rather accomplished in the centre of the park during his second Swansea debut today.

He had extremely quick feet to go passed two Liverpool defenders leading to Sigurdsson’s goal, showing similarities to ex-Swansea midfielder, Joe Allen. That run, alongside the inch-perfect cross into Llorente for his second goal, showed the promise of a superb signing by the newly-appointed Paul Clement.