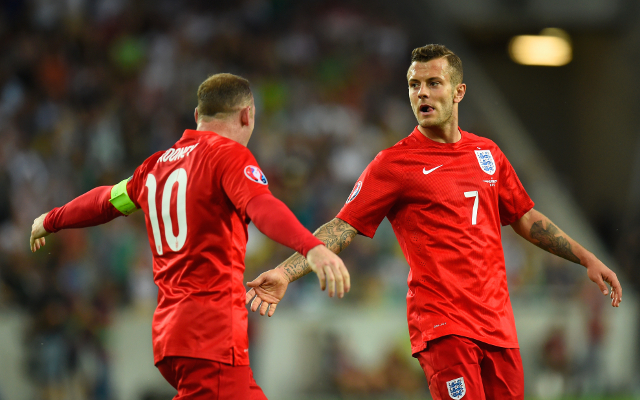 Arsenal loanee Jack Wilshere was among many players to pay tribute to Wayne Rooney on Saturday after he made Manchester United history.

The 31-year-old scored his 250th goal for the Red Devils, moving him clear of Sir Bobby Charlton at the top of the all-time top goalscorer’s charts.

Wilshere, currently on loan at Bournemouth, took to Twitter to reveal how delighted he was for his England teammate, and insisted that he’s in fact the best player that he’s ever played with, as per the tweet below.

Unbelievable achievement @waynerooney proper captain and by far the best I have played with ? #RoleModel pic.twitter.com/lv95nmPU3t

Evidently, Arsenal fans weren’t impressed given the number of world-class players that Wilshere has played alongside in north London.

From current stars to Alexis Sanchez and Mesut Ozil to some suggesting Cesc Fabregas and others, there’s a pretty big list to choose from.

Others took a more comedic route with Andrey Arshavin and Nicklas Bendtner getting a mention, but on the whole it looks as though the Arsenal faithful had a good time trolling their midfield ace.

Wilshere is on a season-long loan deal at Bournemouth, and it remains to be seen whether or not he will receive the assurances that he is seeking to stay at Arsenal long term.

Arsene Wenger could arguably do with him right now given the Santi Cazorla injury and with Mohamed Elneny away on international duty, but he’ll have to wait until the end of the season to have him back at his disposal.