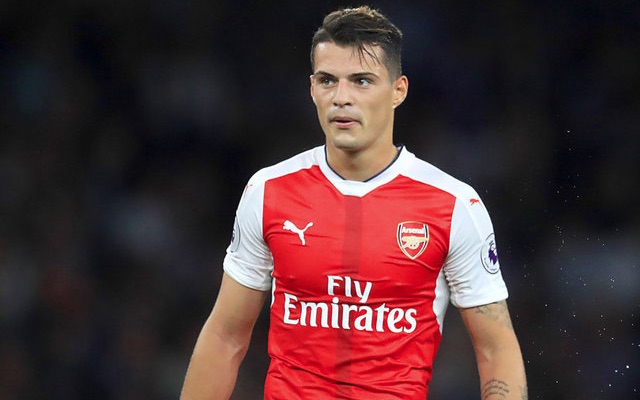 Arsenal boss Arsene Wenger reportedly summoned Granit Xhaka in to explain recent allegations made against him of using racist abuse.

As reported by The Sun, the Swiss international has been accused of using racial slurs against a member of staff at Heathrow Airport.

Those allegations haven’t been proven as Xhaka was also questioned by police over the matter, while the report goes on to add that Wenger personally wanted to discuss the situation with his midfielder.

The Frenchman reportedly called him in for a meeting at the club’s London Colney training ground to explain what happened, with the media offering their take on what supposedly occurred with the member of staff in question.

Arsenal have yet to comment on the matter and will not do so until the police have concluded their investigation after Xhaka voluntarily attended a police station for the interview, but clearly Wenger is keen to understand what the club are dealing with which could lead to disciplinary action.

In turn, it’s difficult to comment on what we don’t actually know for sure as of yet, but what we do know is that it’s certainly not what the summer signing needed after seeing red against Burnley last weekend.

Xhaka’s indiscipline luckily didn’t cost the Gunners on that occasion, but his reputation is becoming a problem as he has continued his poor disciplinary record so far this season.

With Santi Cazorla sidelined with injury and Mohamed Elneny yet to return from international duty at the Africa Cup of Nations, Wenger is already short enough of options in midfield.

Aaron Ramsey and Francis Coquelin will fill in moving forward, but Xhaka’s absence is a huge blow as while he may be guilty of a rush of blood now and again, his ability to offer solidity and linking play between the lines makes him a crucial part of Arsenal’s success.