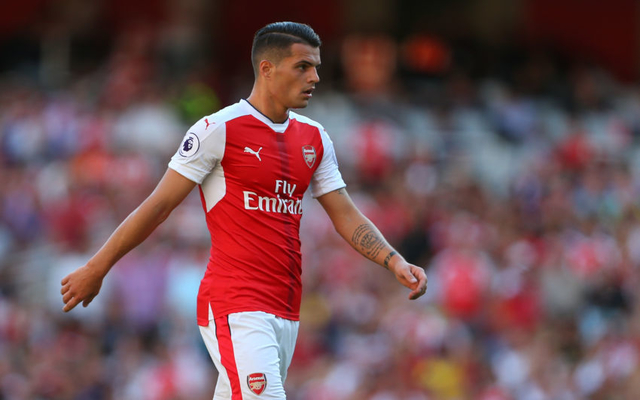 Former Arsenal defender Martin Keown has shared a few words of advice for Granit Xhaka as he’s concerned his stint in north London could end sooner than expected.

The Swiss international was sent off for the second time this season, his ninth since 2014, after a reckless two-footed challenge on Steven Defour in the 2-1 win over Burnley last weekend.

While it didn’t cost the Gunners on that occasion, it’s an area of Xhaka’s game that must be improved in order to avoid becoming a serious problem both for him and his teammates.

Arsene Wenger has since claimed that the dismissal was harsh, but accepted that his midfield summer signing is not a great tackler and will have to improve in that area of his game in training.

Keown took a bit more of a dramatic stance on it though, suggesting that unless the 24-year-old stamps it out of his game entirely, he could end up costing himself a long-term spot at the Emirates.

“With both of his red cards for Arsenal this season, Xhaka cleaned out his opponent with no chance of winning the ball. The 24-year-old needs to eradicate that mentality from his game,” Keown wrote in the Daily Mail.

“He must also practise one-v-one situations with players running at him in training so he can learn how to slow them down before tackling them. … Xhaka cannot go on like this. He needs to get out of the habit of trying to win the ball straight away. If he keeps getting sent off then it will only shorten his stay at Arsenal.”

Keown added that he’s confident that Wenger is the right man to help him change his ways, but it won’t help the French tactician in the short term as he’ll be short of options in the weeks ahead.

With Santi Cazorla out injured and Mohamed Elneny away at the Africa Cup of Nations, Francis Coquelin and Aaron Ramsey are the only available central midfielders.