Tottenham Hotspur trailed 2-0 and 3-2 on Saturday before goals in the 89th and 97th minutes saw them edge past Wycombe Wanderers in an FA Cup epic at White Hart Lane.

After letting the game digest, Spurs fan Robert Summerscales rates and slates Tottenham’s players based on their performance in a memorable 4-3 win. 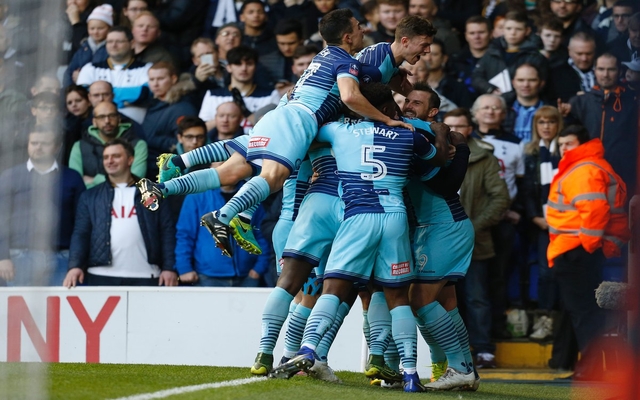 Was busier than he would have expected and made three saves, but was at fault for Wycombe’s first goal after flapping at a cross.

Delivered 13 crosses, but only two found their intended target. Left the field in agony 20 minutes early with an apparent back or hip problem, leaving Spurs – who had already made three subs – to finish the game with 10 men.

Displayed his nativity when he gave away the penalty which handed Wycombe a 2-0 lead. Responded well, though, and looked very composed on the ball, often starting attacks with confident passing and dribbling through the centre of the pitch.

That Cameron Carter Vickers’s hug to a fan! pic.twitter.com/E5gyHBDe42

Didn’t do too much wrong, but was given a tough workout by man-mountain Adebayo Akinfenwa before making way for Mousa Dembele on 61 minutes.

He’s just not Danny Rose, whose attacking impetus and dynamism were sorely missed at left-back.

Provided reliable passes when needed, progressive ones when possible and also showed plenty of desire when out of possession.

Gave a good account of himself in midfield and then also at the back, after dropping deep following Wimmer’s exit.

Did little to win over his doubters. Was OK (not great) going forward, but failed to impress without the ball. His lazy jog towards his own goal in the build-up to Wycombe taking a 3-2 lead will have infuriated any fan who spotted it.

Another disappointing performance from a young player who was seen as such an exciting prospect last season. Much of that excitement has worn off following a string of forgettable cameos this term.

Spurs boss Mauricio Pochettino doesn’t really play with out-and-out wingers, but he allowed Nkoudou to hug the left touchline for 45 minutes until the Frenchman was hooked at half time after failing to provide a spark

Incredibly lively all day. Was credited with two goals, although at least one of them was an OG. Take nothing away from the Korean star, however, because he made his own luck by firing in nine shots. And no player on the pitch completed more dribbles than Tottenham’s no.7.

Heung-min Son has now scored 4 goals in his last 4 games for Spurs.

Looked very comfortable up against the physicality of League Two opposition. Haters would claim that’s because he’d found his level, but Janssen did well, winning and scoring the penalty to draw Spurs level at 2-2, before setting up Dele Alli for 3-3.

Spurs needed an injected of energy and quality at 2-0 down. Alli provided a dose of both after replacing Onomah.

The introduction of the Belgian powerhouse enabled Spurs, even with 10 men, to dominate in midfield, which laid the foundation for their comeback.