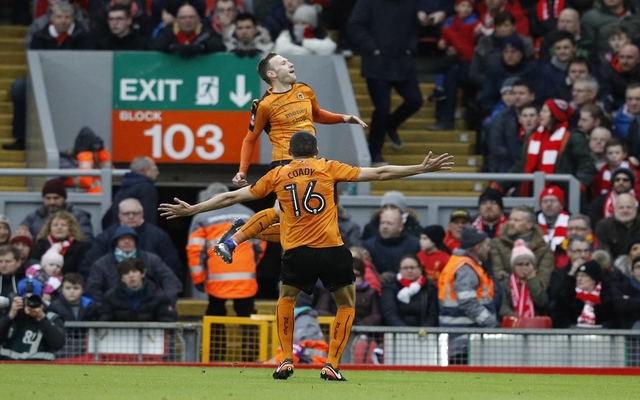 Liverpool have it all to do in the second half of their FA Cup fourth-round clash with Wolverhampton Wanderers after going two goals behind at Anfield.

Richard Stearman had earlier given the visitors the lead after just 52 seconds, but to their credit, the Reds didn’t panic and continued to probe although without ever really testing the Wolves backline.

Jurgen Klopp would have been eager to get his troops in at half-time to boost their confidence and plot a second-half comeback, but Andreas Weimann made it doubly difficult for him as he found the back of the net just before the interval.

It was a stunning Wolves counter-attack as they broke with pace and intent, and it was Weimann who kept his composure to round Loris Karius and give his side a two-goal cushion.

This will now really be a true test of Liverpool’s mettle as with just one win in seven outings in all competitions so far this month, a defeat to the Championship side at home will only pile further pressure on Klopp and his players.

The German tactician opted to make nine changes to the side that faced Southampton in the EFL Cup in midweek, and it certainly hasn’t paid off thus far.