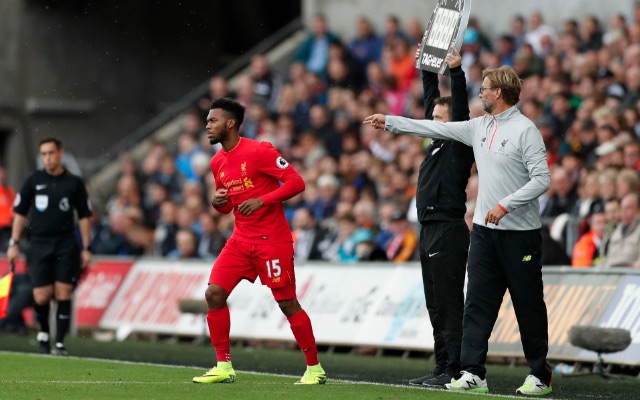 Liverpool boss Jurgen Klopp has reportedly decided to sell Daniel Sturridge in the summer as a result of his on-going fitness problems.

The 27-year-old has had a torrid time with injuries since moving to Anfield in 2012, and it appears as though patience could finally be running out.

According to The Mirror, although Klopp acknowledges the England international’s quality in the final third and his goalscoring record when fully fit, it hasn’t been consistent enough and it’s claimed that the German tactician believes the time is right to find another solution at the end of the season.

Sturridge made 29 Premier League appearances in the 2013/14 campaign, but aside from that, he has failed to feature in more than 14 outings in the other three seasons that he’s been with the Merseyside giants.

So far this season, he has been limited to a substitute role for the most part, scoring six goals and providing three assists in 20 appearances in all competitions.

If Liverpool want to become genuine Premier League title contenders, and compete in Europe if they qualify for the Champions League this season, then they need more from a star striker and ultimately Sturridge is not providing them with that consistent source of goals.

Any exit could be problematic though with no top clubs reportedly interested at this point, while Liverpool may have a tough time prising away two replacements named in the report, with Pierre-Emerick Aubameyang and Inaki Williams of Borussia Dortmund and Athletic Bilbao respectively on their radar.

While it remains to be seen who would come in, it does finally appear as though Liverpool could be ready to make a change.

In fairness, it’s a long time coming as Sturridge has been a source of real frustration for some time with his inability to stay fit and lead the team. As noted above, Liverpool need more than just fleeting appearances for their talisman, and if the former Chelsea and Manchester City man can’t provide it, then they need to look elsewhere.