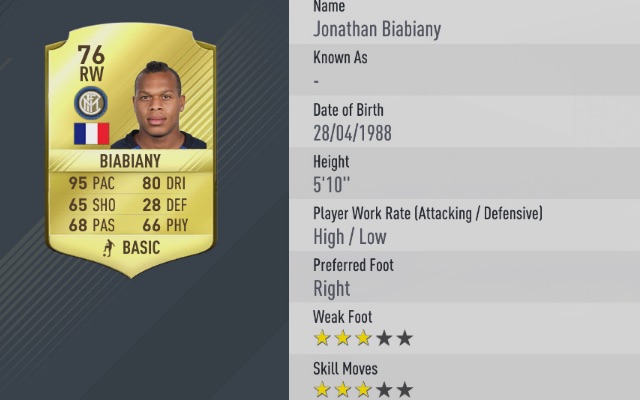 Obviously, FIFA 17 stats are not gospel but Jonathan Biabiany’s 95 pace rating – 94 acceleration and 96 sprint speed – is very accurate, trust us.

The former France U21 international is rapid, but he’s a forgotten man at Inter Milan, who haven’t played him once in Serie A this season.

Winger Biabiany has featured just three times all campaign, with all of those appearances coming in the Europa League.

So, it’s probably time for him to leave the San Siro, especially if he can secure a move to a big club, like Chelsea.

According to Sky Sports, Chelsea are interested in signing the 28-year-old on loan until the summer, when they would consider making the move permanent.

Although Biabiany currently finds himself in the shadows of Italian football, he was a revelation during Chelsea manager Antonio Conte’s time as Juventus boss, scoring eight goals in 60 games for former club Parma.

Biabiany generally plays as a traditional right winger, but that position doesn’t exist in Chelsea’s 3-4-2-1 formation.

There, one assumes Biabiany would either feature as a right-sided wing-back or play just off the striker were he to move to Stamford Bridge.