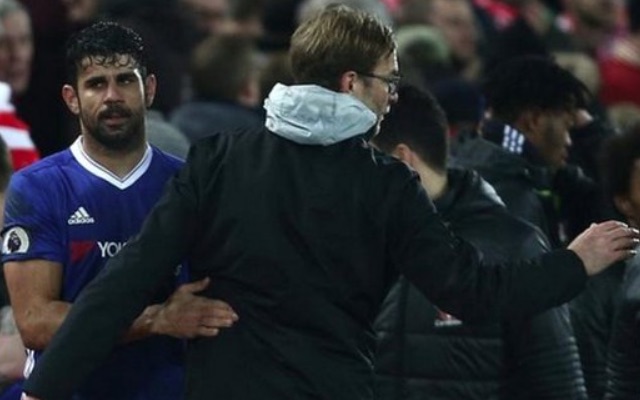 It looks highly likely that Diego Costa will be celebrating a Premier League title win in May, but the Chelsea striker’s chances of getting an invite to Jurgen Klopp’s 50th birthday party in June appear slim.

Liverpool manager Klopp claimed after Tuesday’s 1-1 draw at Anfield that Costa was “not the nicest guy on the pitch”.

Despite suggesting that Costa was not friendship material, Klopp admitted that the Spaniard was a great player having an excellent season.

Klopp told Sky Sports: “If I had played against Costa, I could never be friends, that’s how it is, but when you have him in your team, it’s much more fun. He is a warrior,” said Klopp.

“What [Antonio] Conte is doing with Chelsea is outstanding, but Chelsea without Costa this season?

“He is not the nicest guy on the pitch, but I saw no real big incident and until someone tells me something…

“If someone tells me it was a dive, maybe I will be angry tomorrow, but that would be the wrong decision what, number 27, but it doesn’t make it better.”

The draw sees Liverpool stay 10 points behind Chelsea, who are nine ahead of Tottenham Hotspur in second.