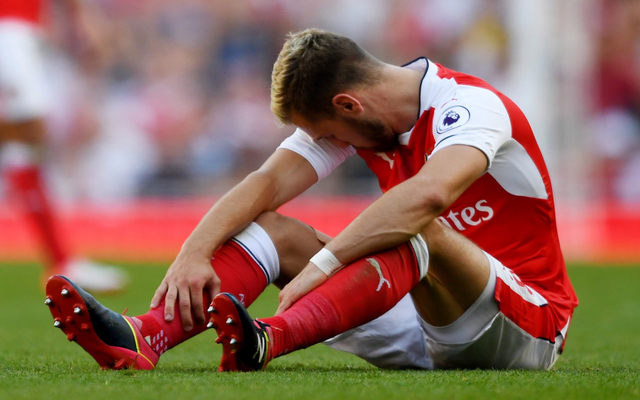 Arsenal boss Arsene Wenger has confirmed that Aaron Ramsey will be sidelined for three weeks after he sustained an injury in the loss to Watford in midweek.

Ahead of his side’s showdown with Chelsea on Saturday, the 67-year-old held his pre-match press conference and discussed team news with the media.

The Welshman was first up after picking up a calf problem on Tuesday night, and he will now be set for further frustration at a time when he had an opportunity to cement his place in the starting line-up.

Instead, Wenger is down another option in the middle leaving him arguably just short of a crisis with Mohamed Elneny still away on international duty, Santi Cazorla a long-term injury problem and with Granit Xhaka still suspended.

Nevertheless, there was some positive news as he suggested that Alex Oxlade-Chamberlain should be fine to feature along with Olivier Giroud with both players suffering with minor niggles and will undergo fitness tests on Friday to determine their condition.

Despite seemingly being very short of options in midfield though, Wenger reiterated that he had confidence in his young players to step up, particularly after Ainsley Maitland-Niles and Jeff Reine-Adelaide both impressed in the FA Cup win over Southampton last weekend.

The French tactician also suggested that Danny Welbeck would be back in the squad after he was rested for the Watford game as he continues to slowly work his way back after a long-term injury.

Arsenal have to react against Chelsea at Stamford Bridge, as a win could push them right back into the Premier League title race. In contrast, a loss would be devastating and would arguably end the title race which just goes to show how much is riding on this encounter.