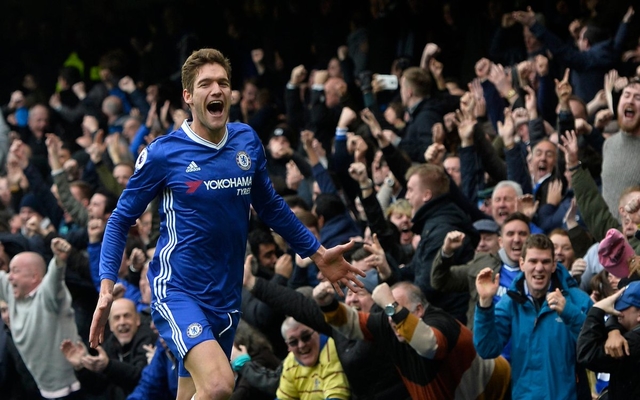 Chelsea took the lead against Arsenal at Stamford Bridge on Saturday with Marcos Alonso breaking the deadlock with a crucial goal.

The visitors had started brightly and were putting plenty of pressure on their rivals in the early stages as they looked to make a quick start and bounce back from that disappointing loss to Watford in midweek.

However, their good work was undone as after Diego Costa had crashed his effort off the crossbar, Bellerin scampered across to try and deny Alonso the chance to score.

Unfortunately for the Arsenal right-back, he was sent crashing to the floor as his compatriot attacked the ball and rose highest to nod the ball into the back of the net and draw first blood for Chelsea.

The incident ended Bellerin’s afternoon too as the he was subbed off after requiring attention on the pitch, and what looked to be an excellent Arsenal start has turned into somewhat of a nightmare with Arsene Wenger watching on from the stands.

As for Alonso, that’s his fourth Premier League goal of the season, more than any other defender in the English top flight.