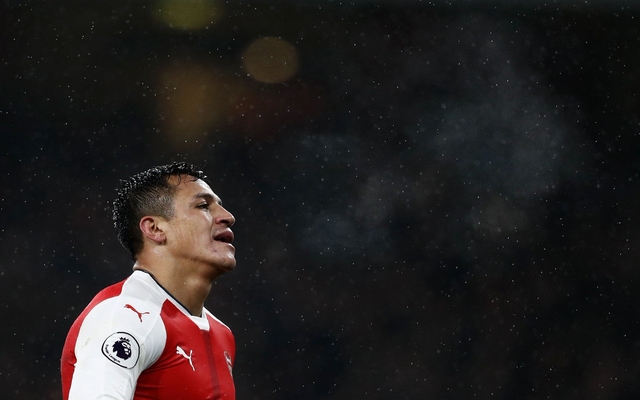 Arsenal star Alexis Sanchez is reportedly a £60m target for Atletico Madrid, as the La Liga giants see him as a replacement for Antoine Griezmann.

The Chilean international will see his current contract with the Gunners expire at the end of next season, and as of yet, there has been no real progress in talks.

Coupled with Arsenal falling away in the Premier League title race again this season as Arsene Wenger comes under intense scrutiny, it remains to be seen whether or not there are big changes at the Emirates this summer.

According to The Mirror, Atleti are ready to take advantage of any unhappiness in north London, as they eye a £60m swoop for Sanchez, who has been identified as the perfect replacement for Griezmann.

As noted in the report, the Frenchman is expected to join Manchester United this summer, and so Diego Simeone will need to acquire another talisman to lead his side from the front.

It’s claimed that if Arsenal are unable to reach a new agreement with Sanchez, then they could opt to sell him in the summer to avoid losing him for nothing 12 months later.

Naturally, they will be desperate to avoid such a situation, but with the club falling short again in search of a major trophy, it remains to be seen whether or not they have any choice.

The 28-year-old has been in great form this season, scoring 17 goals and providing 16 assists in 31 games in all competitions, as he was seemingly leading Arsenal’s assault for the title.

However, it’s a familiar picture for the Gunners after their loss to Chelsea on Saturday, and there’s no denying that Sanchez’s style of play and approach would go hand-in-hand with the culture Simeone has created at Atleti which makes this a very worrying rumour for Arsenal supporters.