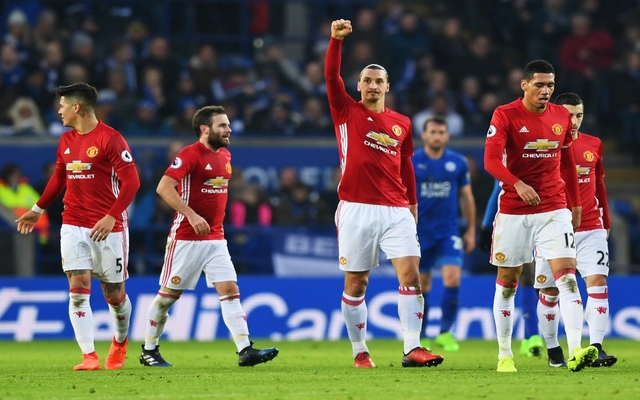 Manchester United scored twice in quick succession just before half-time in their clash with Leicester City at the King Power Stadium on Sunday.

With Arsenal and Liverpool losing this weekend, Jose Mourinho’s side had the perfect opportunity to continue to claw their way back into the race to finish in the top four in the Premier League.

While it was a frustrating start to the game, they eventually found their breakthrough as Henrikh Mkhitaryan raced clear of the Leicester defence before producing a great finish which Kasper Schmeichel couldn’t prevent from going in.

The Armenian international may have struggled in the early months of his time in Manchester, but he’s certainly settling now and will be delighted to have gotten his name on the scoresheet.

However, United weren’t done there for the opening 45 minutes, as they struck again just minutes later through Zlatan Ibrahimovic.

The 35-year-old has now scored 20+ goals in 10 consecutive seasons at club level, while he became the first United player since Robin van Persie to score 20+ goals in a season which was back in the 2012/13 campaign.

It hasn’t all been smooth sailing for Mourinho and his men this season so far, but if they hold out for all three points at Leicester, they will be just two points adrift of Arsenal in fourth spot.