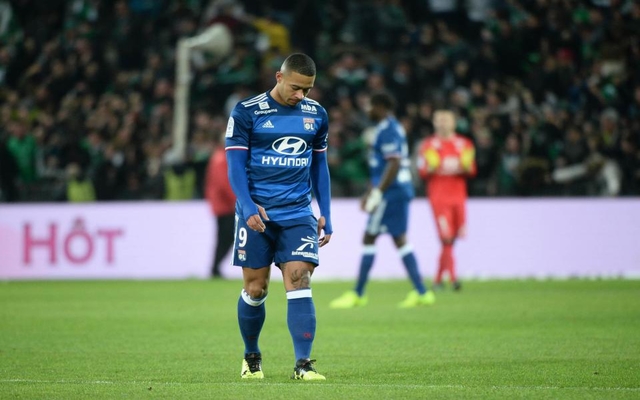 Former Manchester United star Memphis Depay isn’t enjoying the best of starts in France, as he was singled out on Sunday for his poor performance.

The Dutchman has been involved in two games since his January switch from United, and Lyon have lost both including the Rhone derby against St. Etienne this past weekend.

Evidently, he would have been hoping for a fresh start in Ligue 1 after failing to match expectations at Old Trafford, but things haven’t quite gone to plan for him as of yet.

L’Equipe handed out player ratings for the 2-0 loss to St. Etienne, and Depay was given a shocking 2/10 for his efforts as he was singled out ‘ignoring his teammates’ and ‘failing to repay his coach’s faith in him’.

There were two particular instances where the 22-year-old would have infuriated his manager as he tried an extravagant bicycle kick which failed as well as a back-heel to no-one when he thought his left-back had come up to support him.

For Depay’s sake, it really is hoped that his spell in Manchester hasn’t shattered his confidence entirely as the early signs for Lyon aren’t promising.

Having been considered one of the top talents in Europe with his exploits for PSV Eindhoven, he’ll be hoping to overcome these early teething problems and get back to being a decisive forward who makes things happen and wins games.

It didn’t work out for him at United, and if it doesn’t work at Lyon, then he possibly risks failing to settle and fulfil his potential. Time is of course on his side given that he’s just 22, but he’ll be desperate to avoid his time with Lyon being a bust too.