After a disastrous month or so, things aren’t looking quite as positive for Liverpool and Jurgen Klopp as it did earlier in the season.

The Merseyside giants looked on course to launch a sustained assault for the Premier League title as they pushed Chelsea and others through the opening months of the campaign.

However, a run of just one win in their last 10 games in all competitions has seen their title hopes go up in smoke while they’ve also crashed out of both cup competitions.

It’s the first sustained period of pressure for Klopp as he looks to get his side back on track as soon as possible to ensure that the entire season isn’t a disaster as it would be if they fall out of the top four too.

Nevertheless, the statistics below won’t make for good reading for those Liverpool fans hoping that things have progressed since the German tactician came in.

Yes, he still needs time to build his own squad and perfect his ideologies to get this team to exactly where it needs to be, but having been in charge for 54 Premier League matches now, he has an identical record to that of Brendan Rodgers, as seen in the Sky Sports graphic below.

At this stage in their respective tenures, both had won 26, drawn 16 and lost 12, giving them a points total of 94 from an available 162.

The differences between the pair is that Rodgers’ side scored three more goals and conceded nine less in the same time period.

Circumstances are different for every manager and Klopp will point to various factors to show why things haven’t gone as positively as many would have hoped for.

However, Liverpool supporters surely still have faith in his methods and ability to take the club forward, and if that starts with a top-four finish this season, then so be it as that in itself will allow the club and squad to improve. 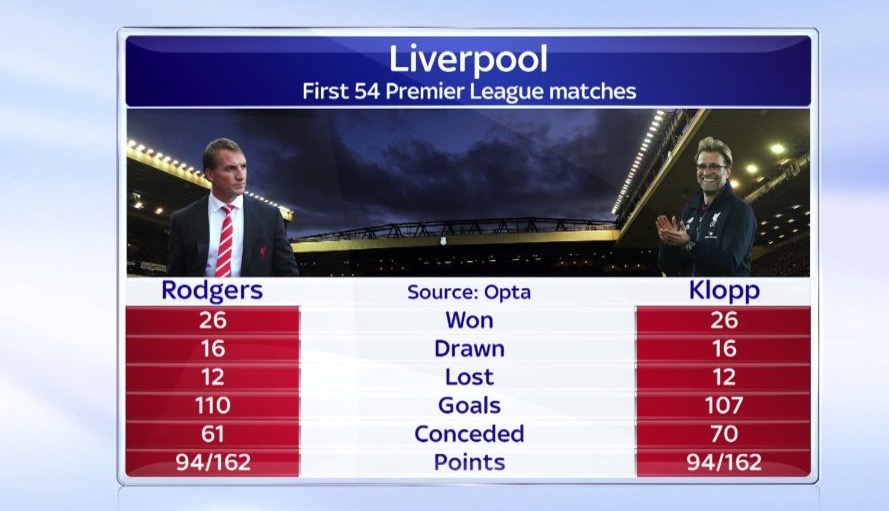