Through a combination of injuries and lack of form, the 21-year-old has endured a difficult spell at Old Trafford since his move from Southampton in 2014, for a fee of £27m as confirmed by BBC Sport.

With just 14 appearances in all competitions to his name this season, his struggles haven’t eased under Mourinho, and it appears as though he may well have to consider his options much sooner than expected.

According to Yahoo! Sport, Tottenham are keen to sign him if his situation doesn’t improve at United, with Mauricio Pochettino possibly interested in a reunion having worked with the youngster during his time in charge of the Saints.

It would seem a much better fit as Shaw has had his problems with Mourinho this season, with the Portuguese tactician dropping him from his recent squads and publicly questioning his commitment after opting out of a game against Swansea City in November due to an injury.

The England international hasn’t featured in the Premier League since October, and although his agent, Jonathan Barnett, has insisted that he is determined to fight for his place at United, as noted in the report, this on-going snub from Mourinho will surely make him question his future.

For the time being, it’s claimed that Shaw will continue to work hard in order to improve his fitness levels, but whether it makes a positive impression on Mourinho, so much so that he gives him another chance, remains to be seen.

The report goes on to add an interesting possible swap deal given Danny Rose has been of interest to United in recent months, with an exchange possibly in the making.

Nevertheless, based on what we’ve seen over the last few years with Shaw, he would arguably relish an opportunity to work with Pochettino again in order to get his career back on track as it seems as though he has it all to do at Old Trafford to earn the trust of his manager. 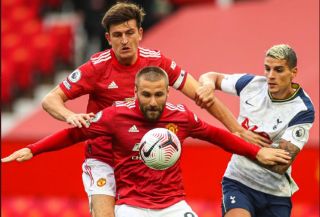