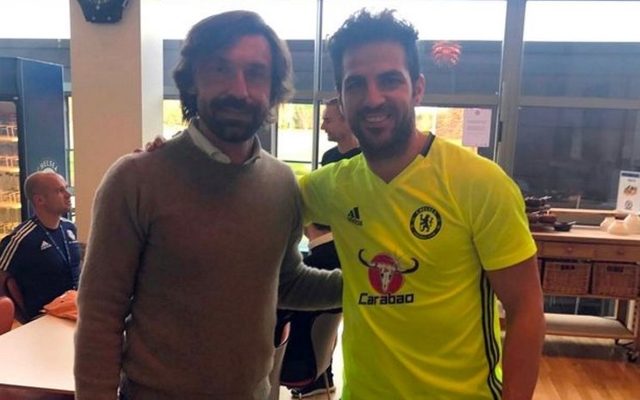 Chelsea boss Antonio Conte has had a moment of madness. The Italian tactician has drawn a comparison between Cesc Fabregas and Andrea Pirlo.

In fairness, the Spaniard is a world-class player. Over a glittering career with spells at Arsenal, Barcelona and Chelsea, he’s collected an FA Cup, a La Liga title, UEFA Super Cup, FIFA Club World Cup and a Premier League winners medal.

Further, for his country, he’s won two European Championships and the 2010 World Cup. It’s a pretty decent track record for the 29-year-old.

However, while there are of course similarities in their style of play, it’s a bit of a stretch surely to be comparing Fabregas to Pirlo, one of the greatest midfielders of all time?

“Cesc is a top player and a genius at football. I can talk [about him] in the same way as about Andrea Pirlo. In the same way. We are talking about a genius of football,” Conte said, as reported by ESPN FC.

“Cesc if he doesn’t run 100m in 10 seconds, I can allow him this, because he’s a genius with the ball. His velocity is in his mind. With Cesc we are working a lot on tactical aspects and to improve also his positioning. Cesc I think is different.”

Conte knows better than most having worked with both players how close they are in terms of ability and influence, but ultimately this will still be a bit far-fetched for many supporters who put Pirlo in the upper echelons of top midfielders to have played the game.

With six Serie A titles, two Champions League trophies, two Super Cups, a Club World Cup and a World Cup to his name, coupled with the fact that few will ever be able to recreate the genius, vision and execution on the pitch that he displayed throughout his career in Europe, Pirlo is undoubtedly on another level.