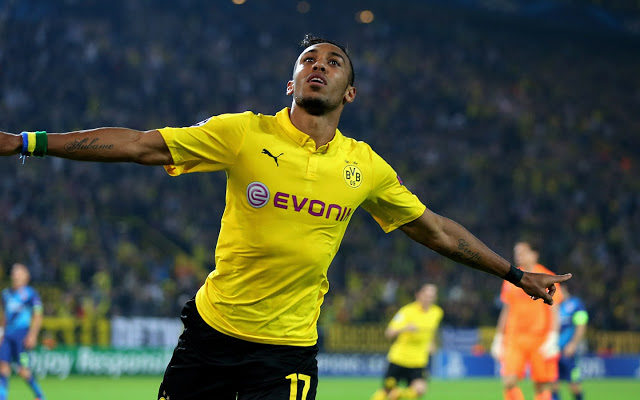 AC Milan will reportedly look to bring Pierre-Emerick Aubameyang back to the club this summer, with Lazio’s Keita Balde another option.

The Italian giants will see Sino-Europe Sports complete their takeover of the club next week, and with their new Chinese owners at the helm, it’s expected that there will be significant money to spend in the summer.

In turn, that has led to speculation linking countless players from around Europe with a move to the San Siro, but Calciomercato believe that Aubameyang could be the marquee signing that the club is looking for.

The Gabon international came through the youth ranks at Milan in 2007, but after several loan spells away from the club without ever featuring for the senior side, he was eventually sold to Saint Etienne in 2011 before becoming a success at Dortmund.

It might prove to have been a costly mistake as the report claims that it could take a bid of between €50m-€60m to prise him away from Germany now, although there are alternatives.

Balde is noted as being one of those options, while Federico Bernardeschi and Sergio Aguero are also named in the report.

It remains to be seen which are more realistic, but work is underway in terms of scouting and assessing the availability of these players ahead of the summer.

Meanwhile, Vincenzo Montella has had his say on Carlos Bacca, with the Colombian international rejecting a move to China this week in order to stay at Milan.

“We are happy with his decision and he has our utmost confidence,” he told reporters at his pre-match press conference ahead of facing Sassuolo on Sunday.

Bacca has struggled this season and doesn’t appear to particularly be a great fit in Montella’s side such has been his goal droughts and inability to link up play.

However, it appears as though the Milan boss will keep faith in him and is confident that he will make a positive impact between now and the end of the season.