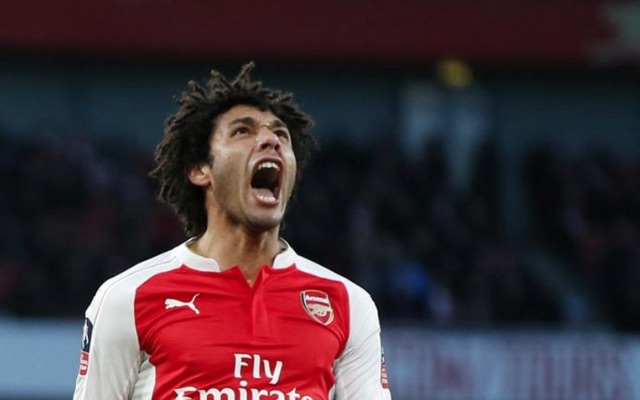 Arsenal midfielder Mohamed Elneny has posted an injury update on social media, and it doesn’t look like it’s good news for the Gunners.

The Egypt international suffered the knock in the FA Cup win over Sutton last week, and it appears as though he could be set for a spell on the sidelines.

While he did seem positive with his caption, the fact that he was wearing a protective boot suggests that it’s a little more serious and that Arsene Wenger may be forced into an anxious wait to determine whether or not he’s back in time for their next outing.

Thanks Allah for everything ?? pic.twitter.com/WkjJWZntzs

Arsenal aren’t in action until next weekend when they face Liverpool, but it remains to be seen whether or not their combative 24-year-old midfield ace is available for selection.

With Santi Cazorla being ruled out for the rest of the season earlier this week, the last thing Wenger would have wanted would be to see another midfielder go down with an injury.

If Elneny is ruled out, that would Granit Xhaka and Francis Coquelin as the remaining options, while Alex Oxlade-Chamberlain has also done an impressive job when dropping back.

Nevertheless, with Premier League, FA Cup and Champions League games coming up, this isn’t the time of the year to be short of numbers and so Wenger will be concerned.

“He epitomized what it means to play for a club like Arsenal” – Gunners legend heaps on praise on forgotten midfielder for performance vs Chelsea May 15 2021, 15:59
Chelsea FC