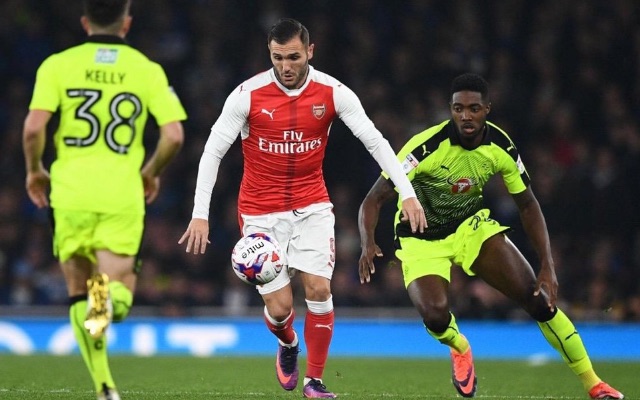 Arsenal forward Lucas Perez will reportedly be offered a chance to leave and return to Spain by Sevilla this summer amid his struggles to break into the Gunners starting line-up.

The 28-year-old has featured for the Premier League giants on just 18 occasions so far this season, scoring eight goals and providing six assists.

While injuries have also been an issue for him, he has found himself down the pecking order which in turn has resulted in it being extremely difficult for him to force his way into Arsene Wenger’s plans and start games.

As reported by The Sun, he could be given a chance by Sevilla to play regular football next season, although Arsenal will look to get back the £17.1m they paid Deportivo to sign him last summer.

With the likes of Theo Walcott, Alex Iwobi and Danny Welbeck ahead of him, it has to be asked as to whether he will see his situation improve between now and the end of the campaign. If it doesn’t, coupled with the fact that Perez will want to stake a solid claim to make the Spain squad for the 2018 World Cup, a summer exit could be the only answer to solving his issue.

The Spaniard has been linked with other clubs over the past month or so, and interest is likely to be high given his efforts for Deportivo last season and the impact he has made for Arsenal when he has featured.

However, it remains to be seen if any interested parties are willing to meet Arsenal’s demands, and if they are the right fit for him to want to leave as he will also surely be disappointed to leave the Premier League without having a real impact.