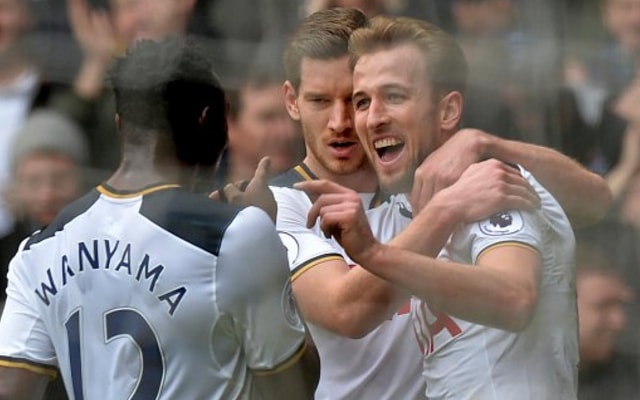 Tottenham kept their title hopes alive by easing past Stoke City, as Harry Kane bagged a hat-trick in a 4-0 victory.

Stoke, who don’t often get much joy from their trips to White Hart Lane, lasted just 14 minutes today. Kane beat Lee Grant with a fine finish to bag the 100th club goal of his career – quite an achievement for a 23-year-old. It also took him over the 20-goal mark for the season, meaning this is the third consecutive campaign he has done so.

Merely 17 minutes later, Kane bagged his second of the game – and what a goal it was too. Christian Eriksen swung in a corner, and it appeared to be a move that Spurs had worked at on the training ground. Kane latched onto the ball on the edge of the penalty area and fired emphatically into the corner with his weaker foot. It was a stunning finish from the England international.

Before the end of the first-half, Kane had completed his hat-trick. It was quite a significant trio, too. It was the 23-year-old’s fourth Premier League hat-trick, meaning he has bagged more than any other Tottenham player since the competition was created in 1992. It was also his third hat-trick in the space of nine games – which just defies belief.

In first-half stoppage time, Kane appeared to have got bored of scoring and decided to turn provider. After some good work down the left-hand-side, Kane swung in the ball towards the back-post. Dele Alli was primed to fire home and wrap up all three-points for the home side in the first period.

Spurs are up to second, at least until Manchester City play. Here are our player ratings for both sides.