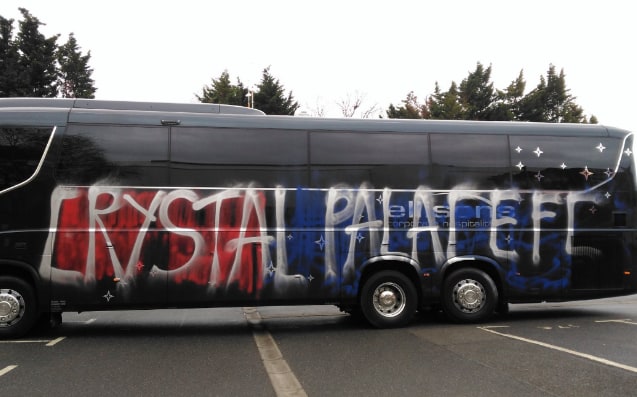 While we don’t condone vandalising property in any way, if you’re going to do it, at least get the right target. That’s something that Crystal Palace fans struggled with it seems.

As reported by The Telegraph, a few Palace fans have ended up costing the club £40,000 after they inadvertently defaced the club’s team bus thinking that it was Middlesbrough’s.

The coach was parked at a hotel near Selhurst Park, and on Saturday morning it appeared with ‘Crystal Palace FC’ spray painted on the side of it.

While the team still used the bus for the game, Palace assistant head groundsman, Dean Waters, posted a tweet about the matter and revealed that it was the club’s own supporters who were responsible for it.

“£40,000 worth of damage on our coach thinking it was the Boro coach. Nice one! #cpfc,” Waters tweeted. For whatever reason, he then switched his privacy settings so the public can no longer read it.

While it was a comedy of errors off the pitch, Sam Allardyce will merely be delighted with the fact that his side were able to pick up three crucial points in their bid for survival.

The win moves the Eagles one point clear of the relegation zone ahead of Leicester City’s game with Liverpool on Monday night, but they’ll want to quickly forget this silly and rather embarrassing mistake from their own supporters…

Palace fans vandalise what they think is the boro coach. But boro flew down and borrowed one of the palace coaches causing £40k of damage ?? pic.twitter.com/SsXn6F6KoR