Juventus have reportedly made a €30m bid for Arsenal forward Alexis Sanchez as the Gunners look to replace the Chilean international.

Sanchez’s current contract with Arsenal expires at the end of next season, and with no progress being made it seems over an extension, there is a possibility that they could lose him this summer.

As seen on the front page of Corriere dello Sport on Friday below, it’s claimed that the Bianconeri are ready to launch a €30m bid for him at the end of the season, which will certainly be a major concern for Arsenal in their bid to keep their talisman at the club. 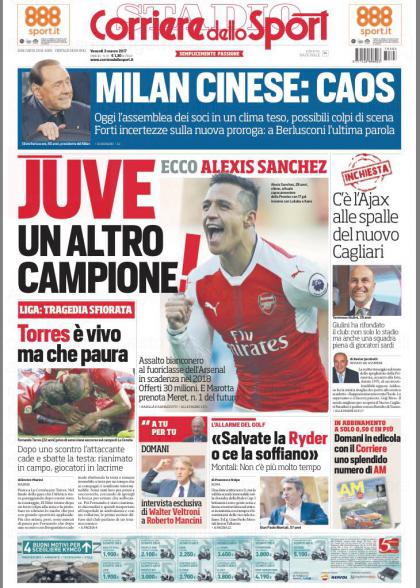 The report claims that Juve are ready to launch a ‘siege for the Arsenal star’, and so it remains to be seen whether or not the north London giants can hold on to him.

In contrast, The Daily Mail report that Arsene Wenger has already begun the process of trying to find a replacement for Sanchez with three big names on their transfer shortlist.

Lyon’s Alexandre Lacazette, Borussia Dortmund’s Marco Reus and Porto’s Andre Silva are reportedly all being monitored by the Gunners, although it remains to be seen whether or not they have any luck in signing any of them.

Sanchez’s wage demands appear to be the major stumbling block, as it’s claimed that he will not accept anything less than £250,000-a-week, which is a major increase from what he currently earns at £130k-a-week, as per the Mail.

Given his form this season with 20 goals and 16 assists in 34 appearances in all competitions though, it’s no surprise that the Arsenal faithful want to see the 28-year-old stay.

However, signing one of the three names mentioned above would certainly soften the blow of losing him, and in turn Arsenal could be poised to make major changes to the look of their line-up next season.