Chelsea icon Frank Lampard appeared on Monday Night Football this week, and he was asked by Sky Sports to name his Premier League team of the season so far.

Given his ties with the Blues, but more so the fact that several individuals have been so impressive under Antonio Conte so far this season to lead them to the top of the Premier League table, Chelsea dominate the line-up.

Lampard singled out David Luiz for praise as he believes that the Brazilian international has matured significantly this year, while Cesar Azpilicueta joins him in the backline.

Summer signing N’Golo Kante has picked up from where he left off last season at Leicester City as he looks to win back-to-back Premier League titles with different clubs and he has certainly been a major factor in Chelsea’s run this year.

Eden Hazard and Diego Costa complete the Chelsea contingent as both have been in great form throughout the year and continue to play pivotal roles in the club’s title charge.

Elsewhere, Lampard was also keen to heap praise on Michael Keane for his performances for Burnley this season, while David de Gea gets the nod in between the posts and Southampton’s Ryan Bertrand completes the defensive line.

Adam Lallana has been in great form for Liverpool this season, while Lampard insists that Dele Alli’s form since the turn of the year is enough to see him make the cut.

Although he did concede that Romelu Lukaku was unfortunate to miss out, Harry Kane partners Costa in the line-up as the Tottenham talisman continues to score for fun in recent weeks and so he certainly deserves recognition for that.

It remains to be seen if Lampard’s old club finish the job now and win the title this season, but he’s got it pretty much spot on with this team, albeit it’s a question of opinions and others will certainly disagree with some selections. 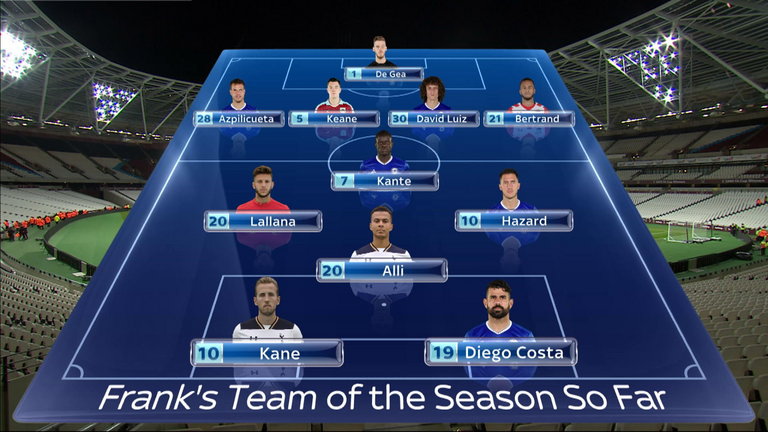