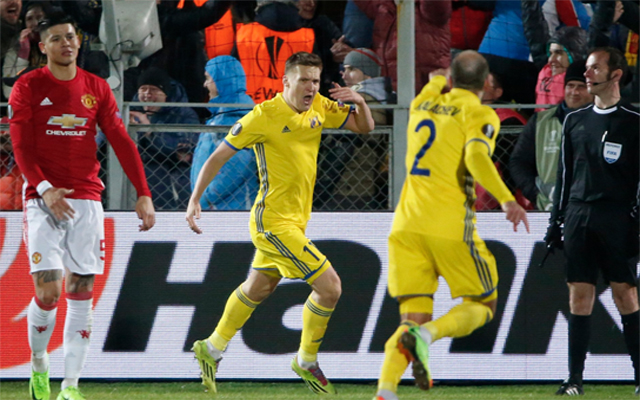 Manchester United were held to a 1-1 draw by Russian minnows FC Rostov in their Europa League last-16 first-leg clash.

Manchester United took the lead, and bagged a crucial away goal, through Henrikh Mkhitaryan. It was touch-and-go whether the Armenian would be fit in time to play tonight, but Jose Mourinho will be thankful that he was fit enough to start. Mkhitaryan latched onto Zlatan Ibrahimovic’s smart cut-back and fired into the back of the net to give United an early advantage in the tie. Click here to see Mkhitaryan’s opener.

FC Rostov are the lowest-ranked side left in the Europa League, but they were not going to roll over to Man United without a fight. Aleksandr Bukharov showcased his talent by bringing down a lofted pass expertly and firing past Sergio Romero to peg United pack. You can see that goal here.